I saw that kitties were noticing that Grete doesn't appear as often as she should on Cory's blog. Grete is a big part of our lives. I like her now that she respects me. For the longest time Grete woofie thought it was great to get a rise out of me. Not that it was easy to do, she just singled me out for teasing all of the time. It was her fault. I never overreacted at all. She'd nose at me and laugh. How would you feel? 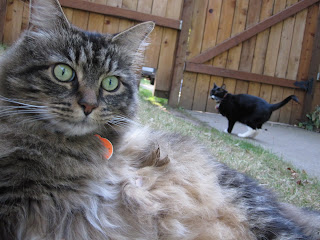 So the real reason she doesn't get as much blog time? She's afraid of the camera inside the house! Still! Silly woofie. I pawed through mom's pictures and most of the ones of Grete look like this. 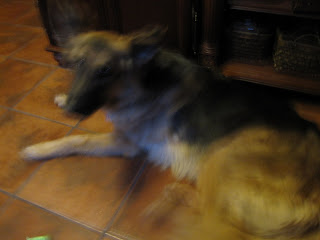 She's ok with the camera outside. And Nigel? He doesn't appear as much because he's B-O-R-I-N-G. One picture of him looks like all the others. I think he's going to sleep and eat himself into oblivion. He weighs almost as much as me, but at least I move around. He moves from the cat tree to the food dish and back. At 9pm he moves to the bed and hollers for mom to join him. He stays there until morning and gets all mushy face with mom and dad. It's disgusting. Then he goes back to the cat tree and starts the whole routine over again. I'm bored just telling you about it. At least I'm interesting.
Meantime, we've been invaded by 3 strangers. Mom calls them family. Ellie and Cory are being obnoxious suck ups and I swear Ellie's paws have not touched the ground since they arrived. I myself remain distrustful and unconvinced they could be related to me.

Labels: Ginger, Ginger is a gossip

You know the woman says that about me sometimes--that I'm boring and always do the same thing... sigh

Ginger, you should syndicate your posts to papers across the world. You are a very funny ladycat!:)

Grayson iz like that with company, Ginger! Totally a suck up! He gets all the scritches whenever anyone comes over. Gandalf iz more discriminating but will eventually come out. Whitey purrs, but prefers to remain aloof, at least so far.

Demand your share of squizzles Ginger! You deserve them. Otherwise, visit us and we'll cuddle you - when Target isn't watching :P

Nigel got sooooome routine established there. The truly good life, huh?! Ginger, try to get some treats out of these visitors, they dispense them easily in our experience. We love Grete and thought that Cal was so handsome too. Maybe there's a photo love story in waiting...
Purrs, Siena & Chilli

Nigel has a lot of naps and love to catch up on, he didn't know the joy of inside for a long time!

We have to admit that out of the thousands of photos we have taken of us. Hundreds of them look like Grete's!

I think Nigel may be onto something...

Nothing wrong with energy conservaton in these troubled times.

Ginger, if it wasn't for you we wouldn't know what's really going down at your house!

With families as large as ours, it's hard to all get equal face time on the blog.

Thanks for the scoop, Ginger! You always tell it like it is...

Wow Ginger! That was some serious meowing! Always fascinating to see how other kittehs live.

Thanks for letting us know why Grete and Nigel aren't on your blog that much. Our woofies aren't on our blog much 'cause most of their pictures look just like Grete's!!

Ginger, you're such a funny girl! I love your descriptions of Grete and Nigel. Could Grete maybe be frightened of the camera flash? That would make sense.

Nigel's probably just luxuriating in being an indoor cat when he used to live outside all the time. So I guess you have to give him a break.

Have fun avoiding your guests! At least Ellie is keeping them occupied.

Thanks for telling us how it really is, Ginger!

That is so funny that Grete is afraid of the camera only inside the house - I wonder if it is the flash. And we understand about Nigel - Kirzon is the same way so he isn't in our blog as much. Actually, Lola is that way too. I guess some kitties are more interesting than others.

And have fun with the guests - maybe they will give you treats if you are nice to them!

We get called boring sometimes, too...but we have our moments. Funny about Grete being afraid of the flashy box thing! Maybe it's just the noise it makes, and that she hears it more inside than outside.

We agree that if you're nice to the invaders, you might get treats. Then again, we don't like anyone except our Mommy and we run and hide, so who are we to say? MOL

I think Nigel may have it right Ginger.