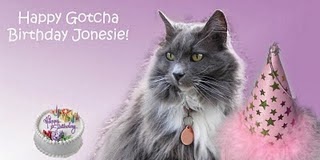 It's my GotchaBirthday today!
And is there any better way to celebrate than with the first baby nip of spring?  I woke up to my mom and dad singing to me.  It was sweet.   I love them and they love me.   I can't believe I am 14 years old now...I've been here 12  years! 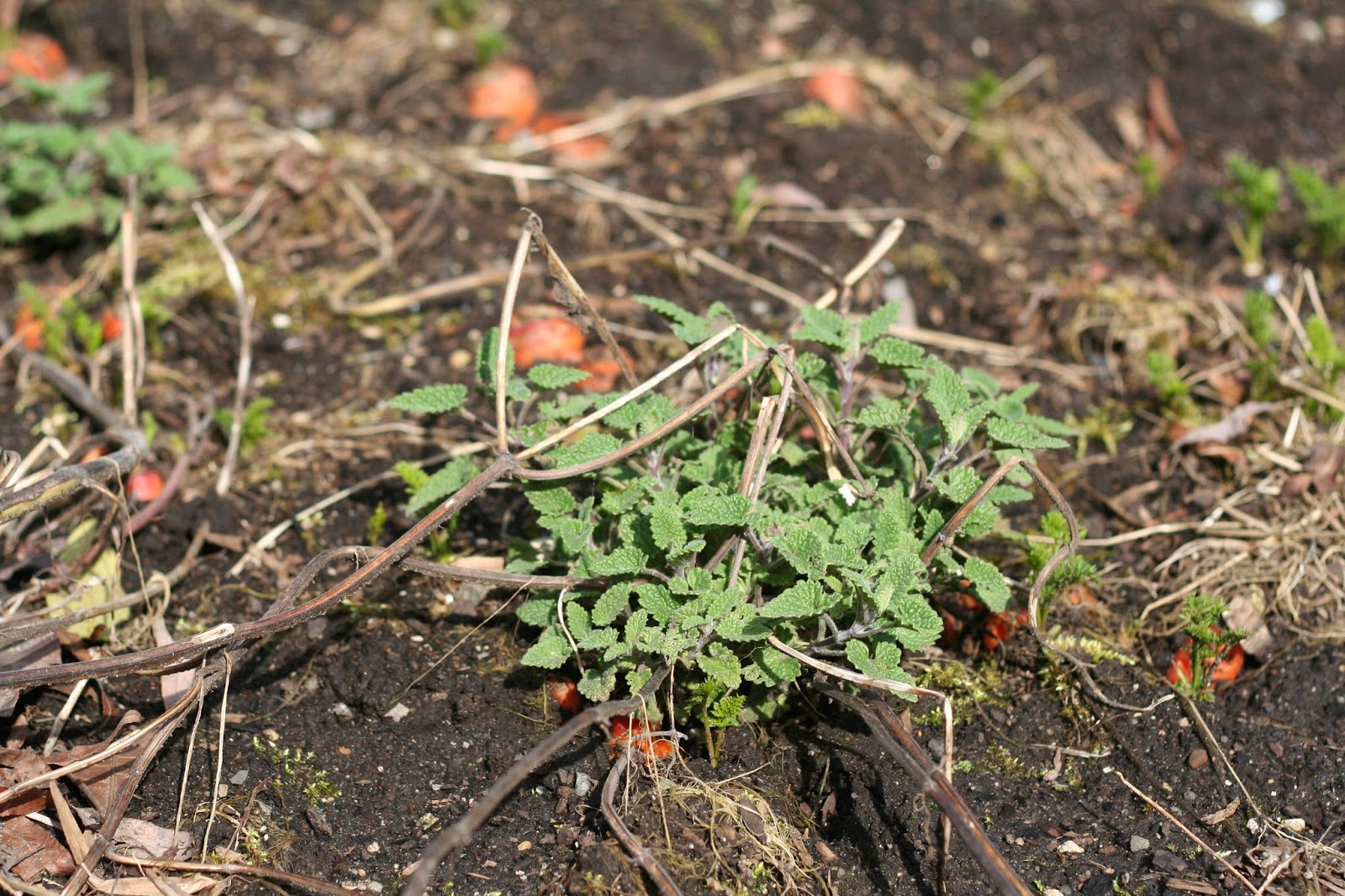 The sun is shining and I'll be touring the garden today at my leisure.  We won't start our spring planting just yet. 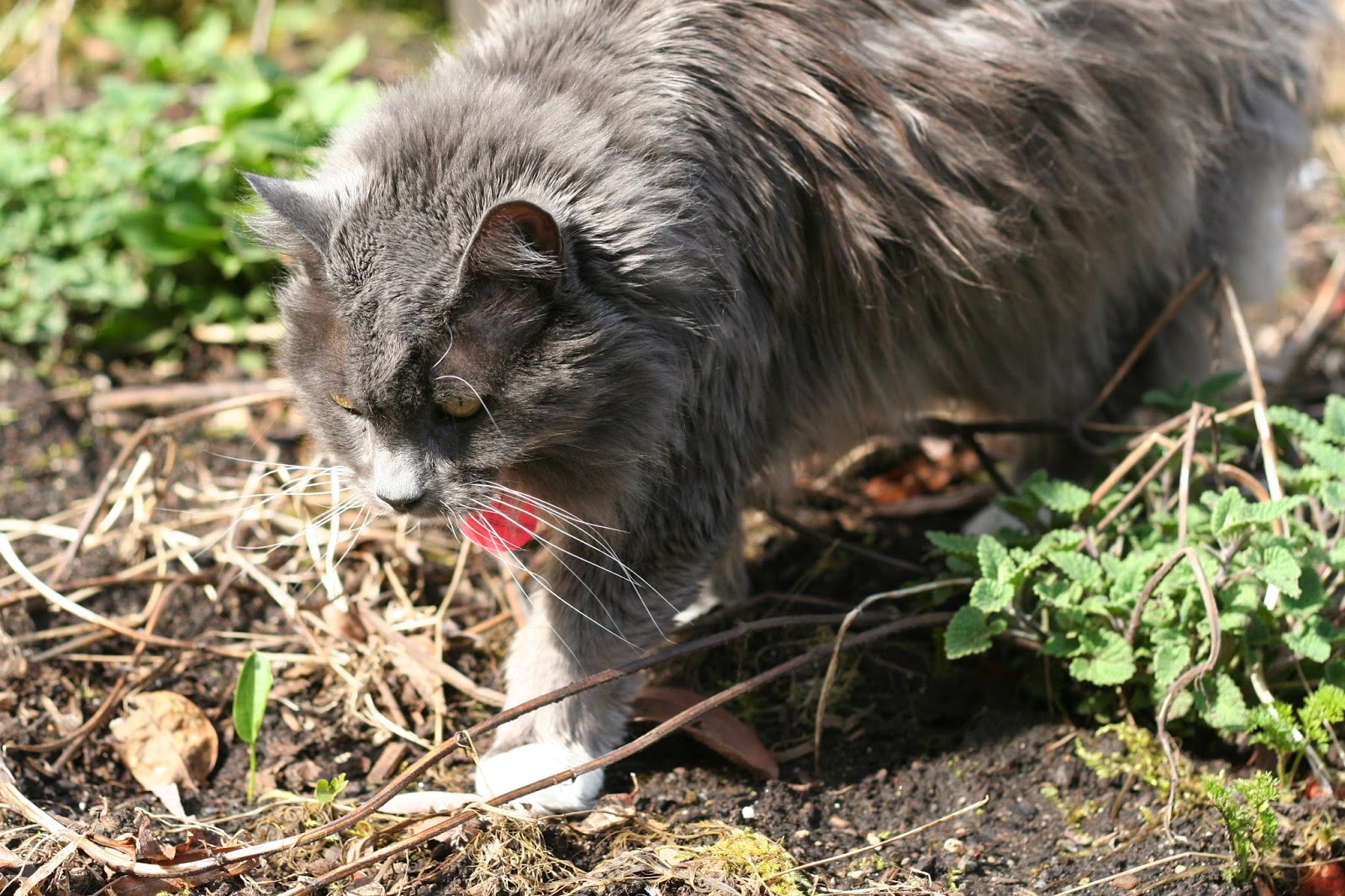 The grass is growing and it tastes great. 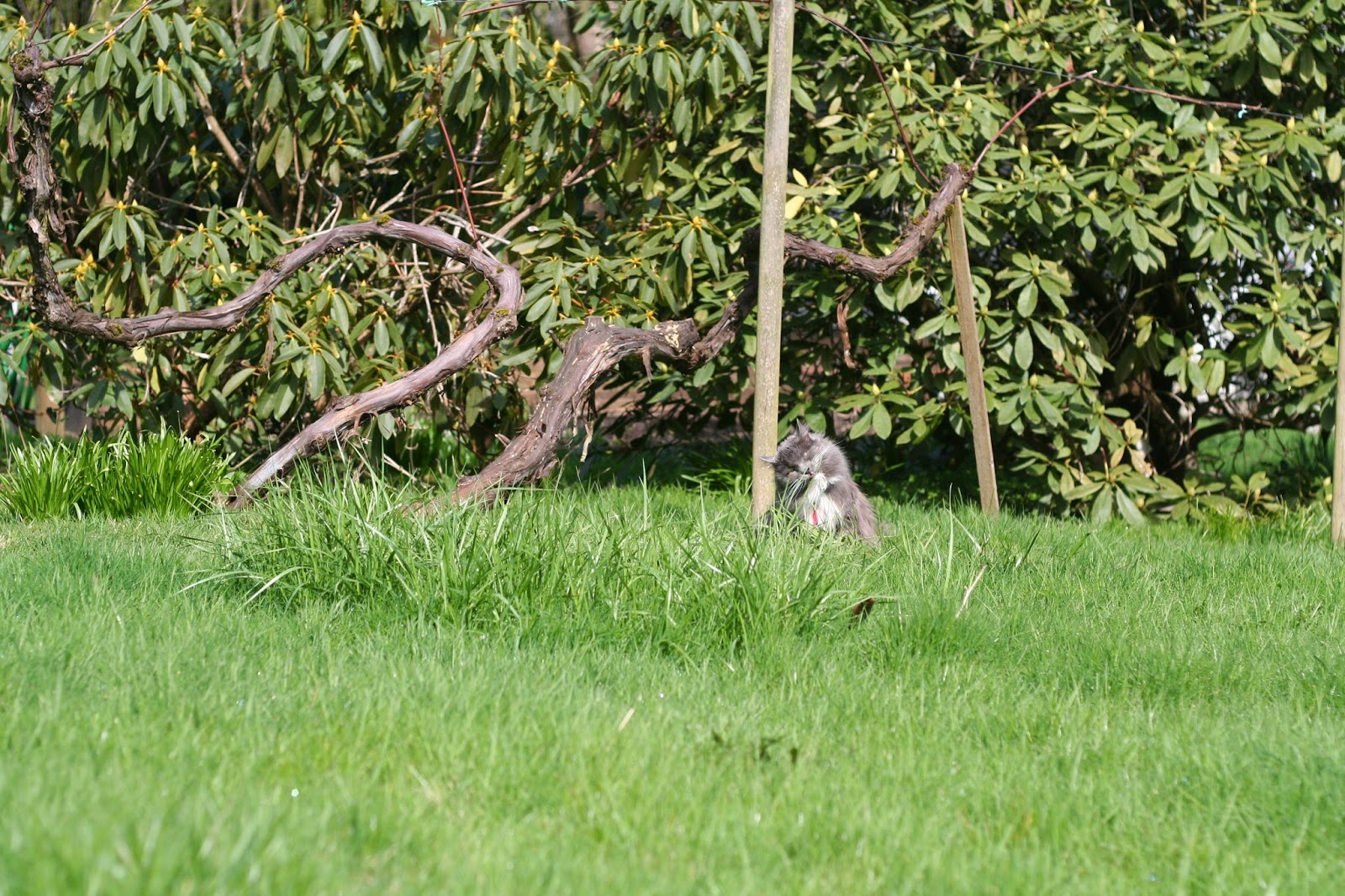 Some of you may be wondering how I'm doing since my treatment for hyperthyroid.   Earlier this month I had to go back to the v-e-t place for a check up and they stole some of my blood for testing.  My levels are now a little low, but because I'm acting fine they say I'm good to go for another 3 months...when they will steal some more of my blood for testing.
Sigh. 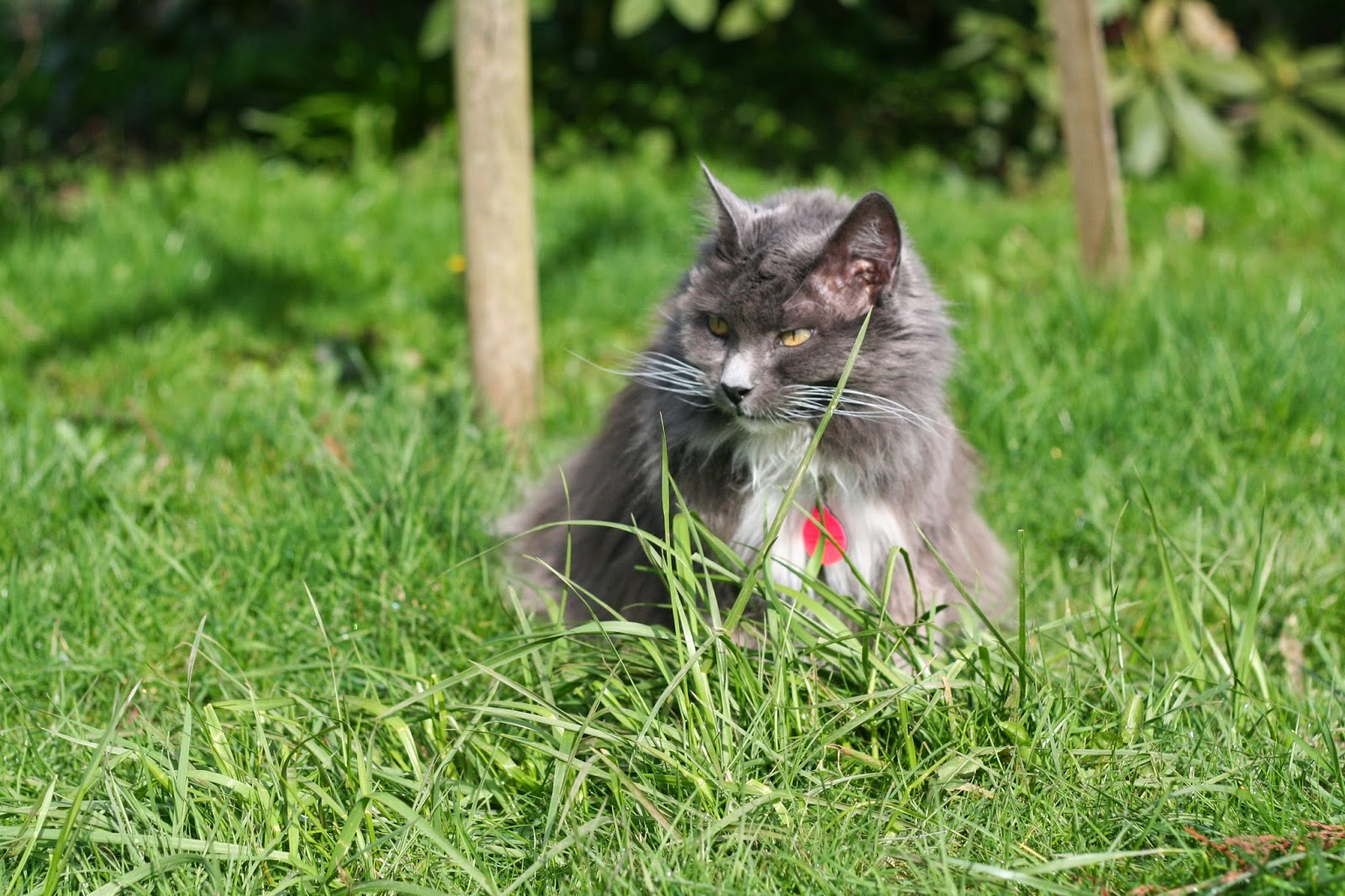 I'm just grateful I'm home, I'm feeling good and I get to spend time in the sunshine in my beloved garden.  It doesn't get any better than this. 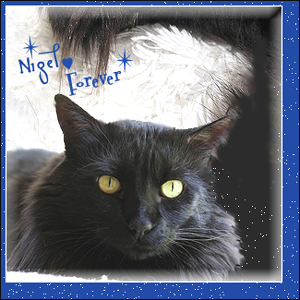 There was something very special about Nigel.   He had such a hard life before he came to live with us, and he always appreciated everything he had.
We first noticed him in our yard, sometime in 2006.  He was young and he had a collar with a bell on it.  He would cruise through the yard like so many cats in our neighborhood.  We called him Bojangles since we didn't know his given name.   As time passed he eventually lost the collar with the bell.
We became worried about him when he was still outside in our yard during the big snow storm in December 2008.   We started watching him more closely and making sure he had food.  After the first of the year we could see that he was sick so we decided to get more aggressive in our attempts to get close.
No matter what I did, I could not get closer to him than 5 feet away.  He would spook and run off.


For those of you who remember, his Gotcha Day in 2009 was cause for celebration.    We borrowed a humane trap from our  neighbors and when he went in after the Fancy Feast he was ours.


He was super freaked out and lived in our TV room for months.  We had him neutered.   He required Prozac to get over his fears and settle down.   We had a compounding pharmacy make a mixture of his drugs mixed into chicken flavored liquid which he ate in his Fancy Feast. There was no way I could pill him.


When he calmed down and learned to trust me, I could brush him.  The photo above was taken after his first Furmination. He had such silky fur.  Eventually we tapered him off the Prozac.
He came about his name in true Cat Blogosphere style.  I couldn't decide between naming him Sebastian or Nigel, so I asked his Blogosphere furriends to vote.   They chose well.
Most of our cats have a kazillion nicknames, but not Nigel.  He loved his name and it fit him perfectly. No need to call him anything else. 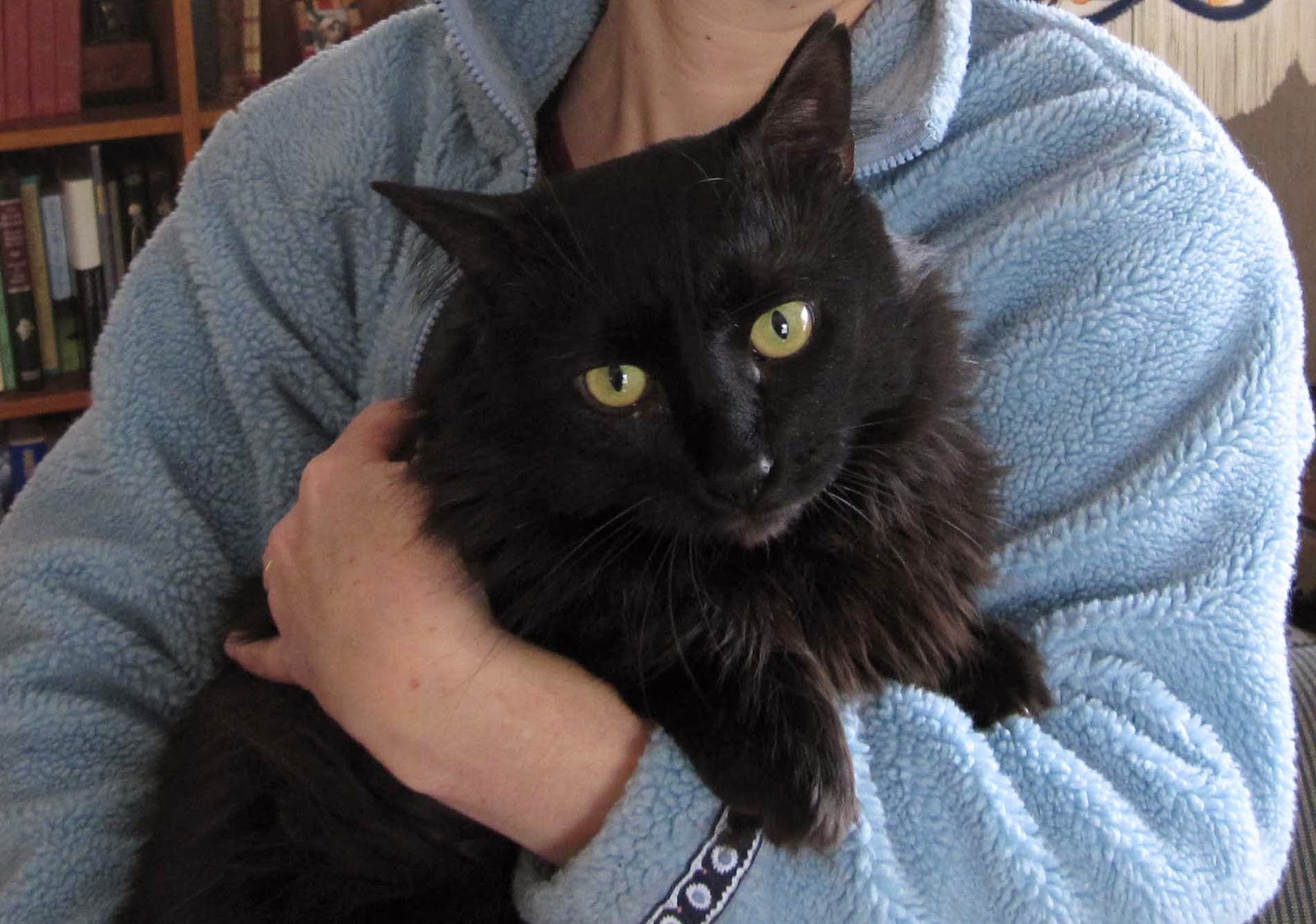 He became my big baby.  My big hunk 'o mancat.  He always felt safest when it was bedtime. He would be there waiting for me.  He would literally grind his nose into my hands, wanting pets.  He was a big boy, 17 pounds so anything in my hands would be knocked away.   That was Nigel's special time of the day. 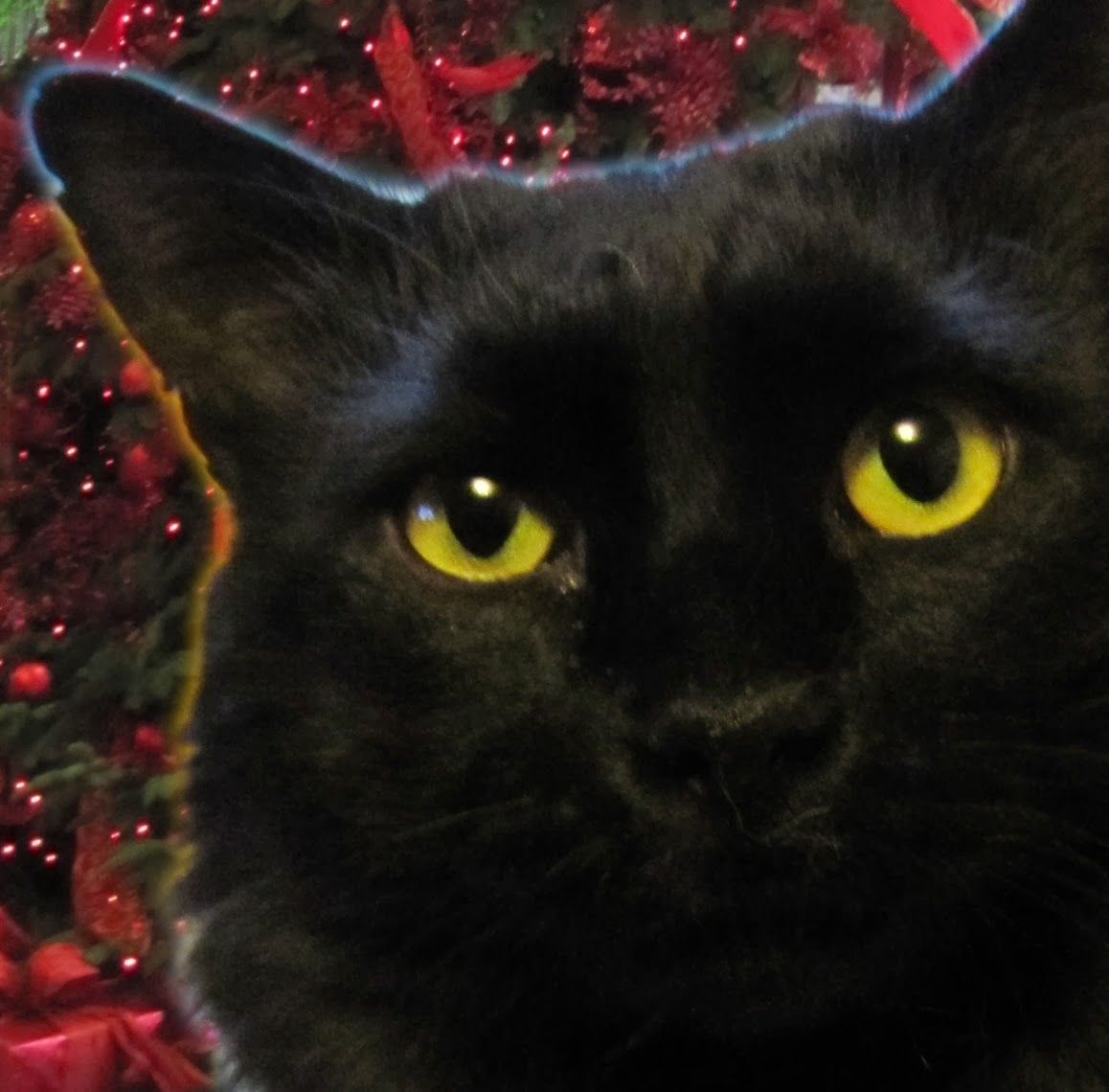 Nigel adored the Christmas tree.  He was always fascinated by it and would sit under the tree staring at it for hours at a time.   I believe it was because during that snowstorm of 2008 when he was homeless in our backyard, he looked up at our house and the tree in the window.  When he was finally inside and warm...he found once a year, when the tree appeared again, it was his.
He had arrived. 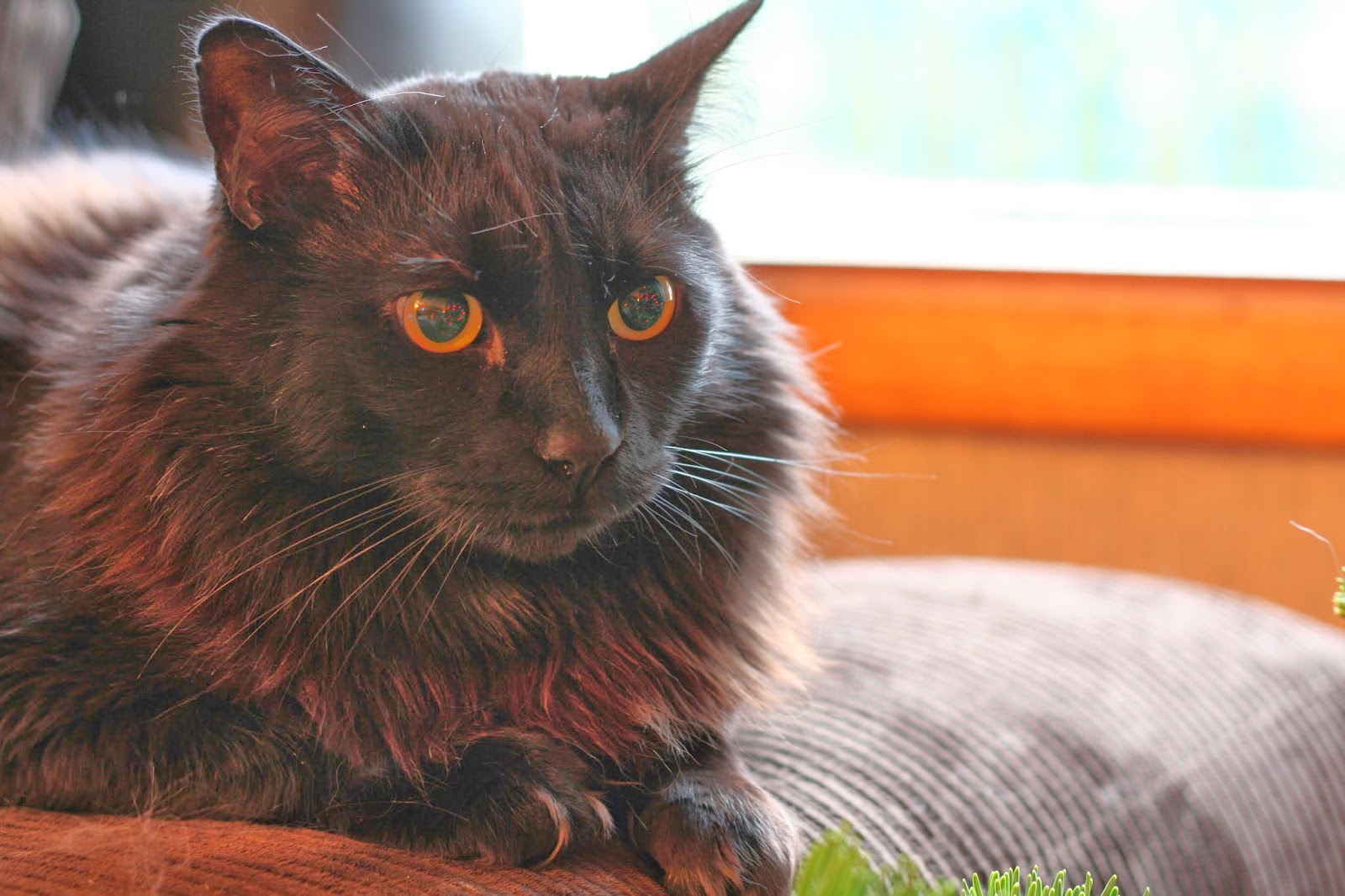 If you biggify the photo above you may be able to see the Christmas Tree light reflected in his eyes. He had magnificent paws. 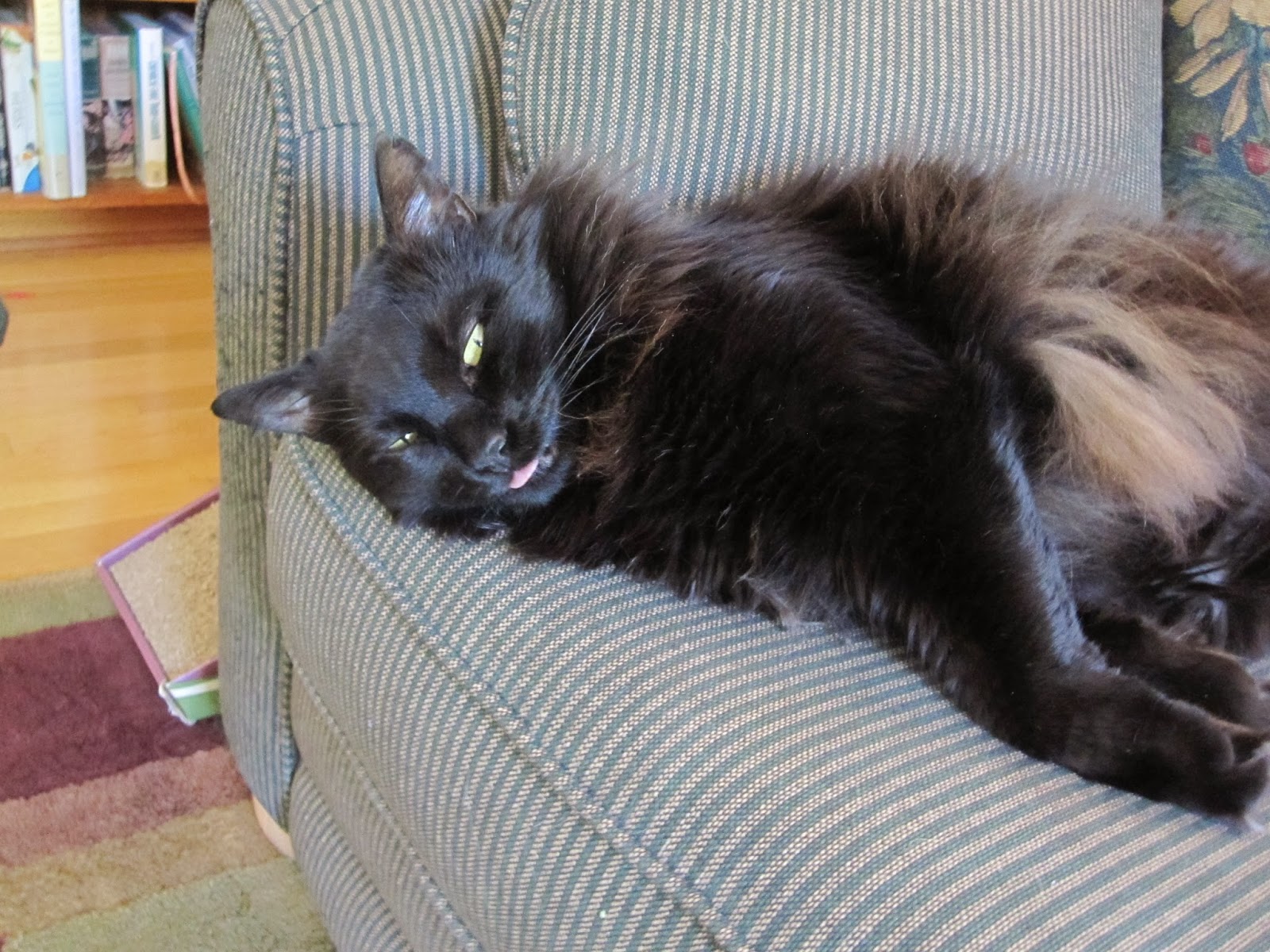 He learned to relax and enjoy his home and family. 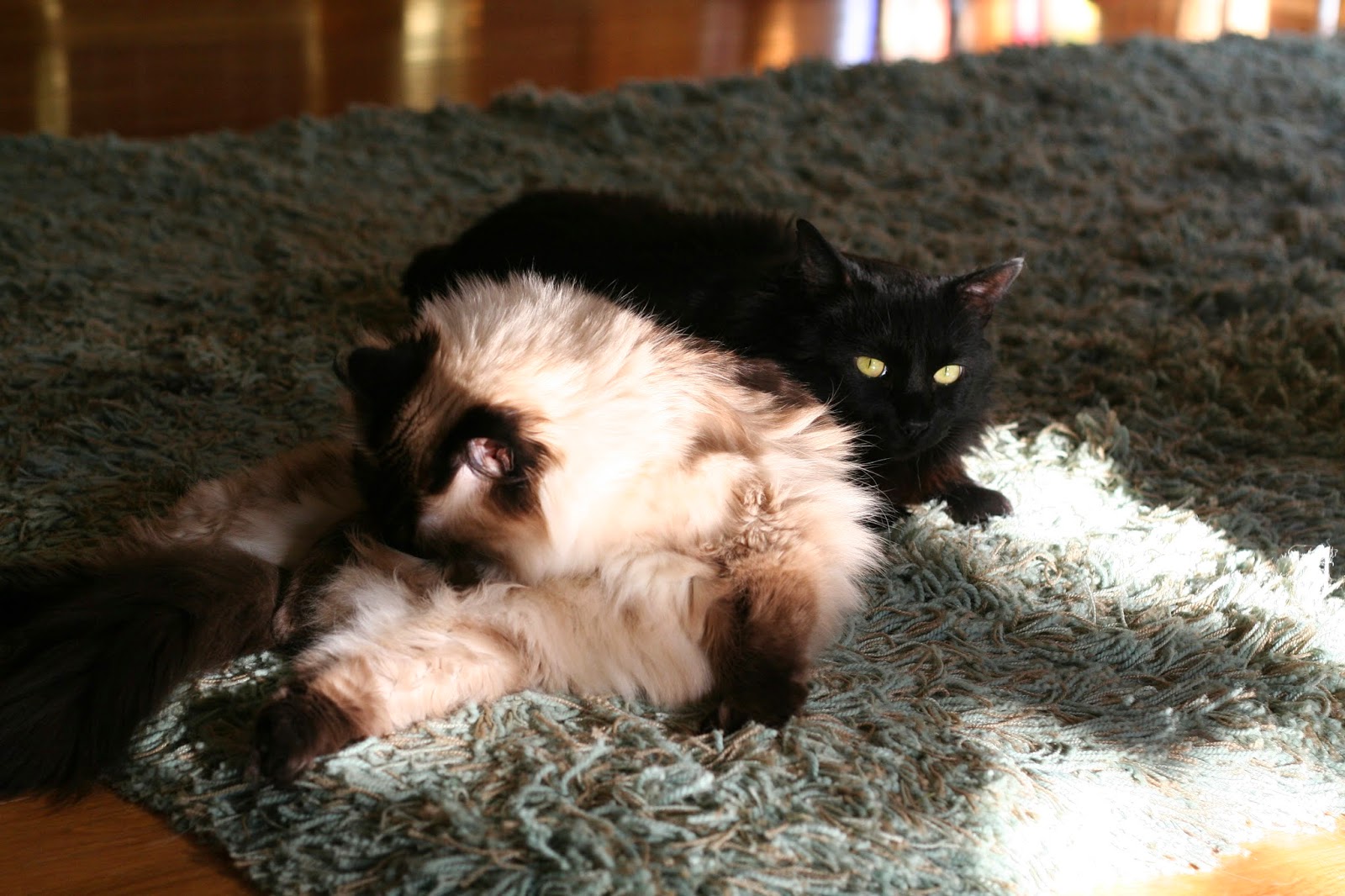 He adored Ellie.   When he first moved in, he didn't have good manners with the ladies.  We joked that he was a cave man...and coached him on how to be more subtle.  He learned.   Ellie did love him. 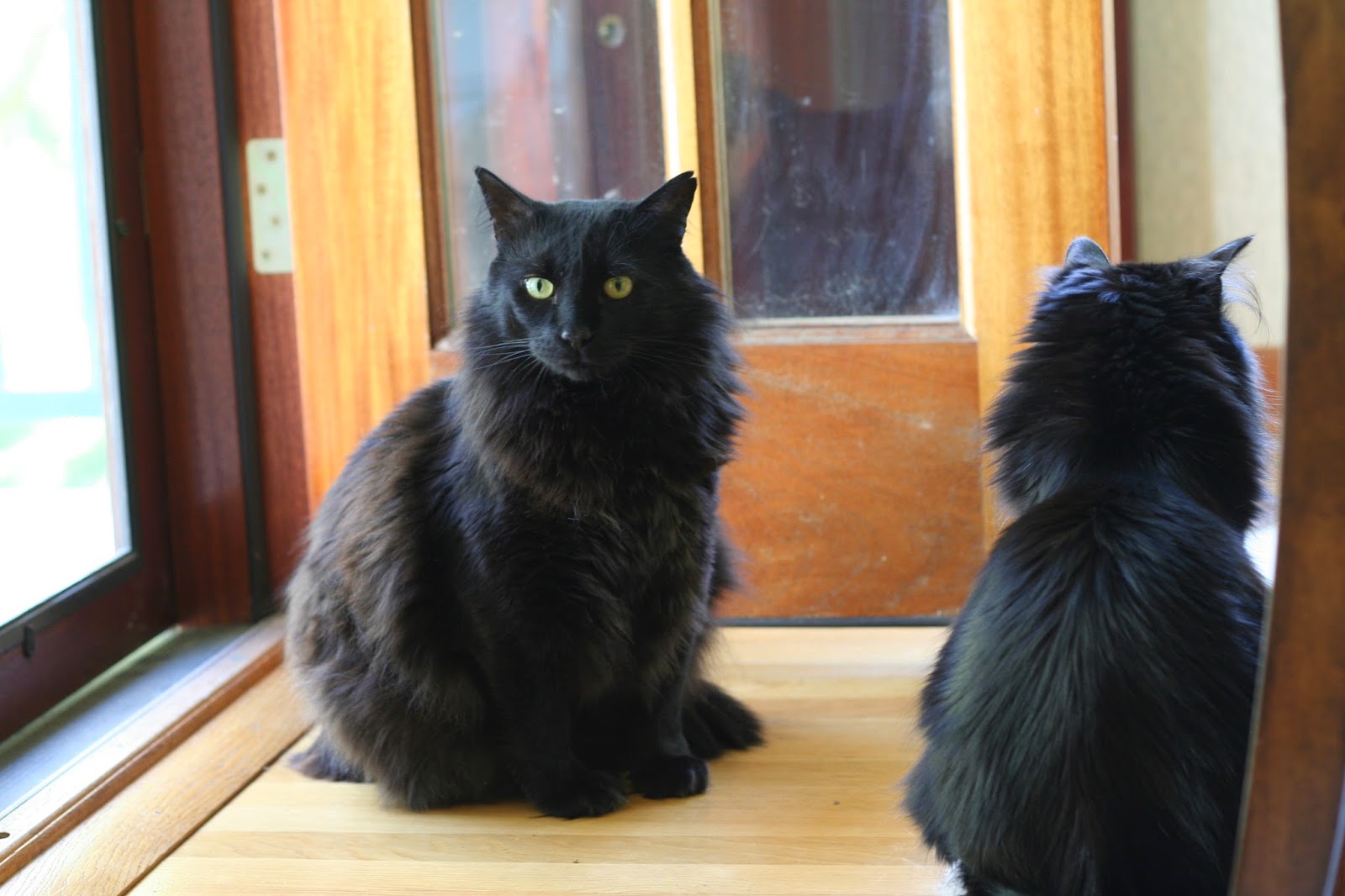 Cory loved Nigel too.
I don't have a photo of them together, but Nigel and Figaro were best buddies.  They are both "fraidy boys".   When our vet did a house call last year to do check ups on everyone, both Nigel and Figaro hid in our closet.  Together.  Not just together, but completely intertwined.
We are giving Figaro lots of extra attention to get him through this. 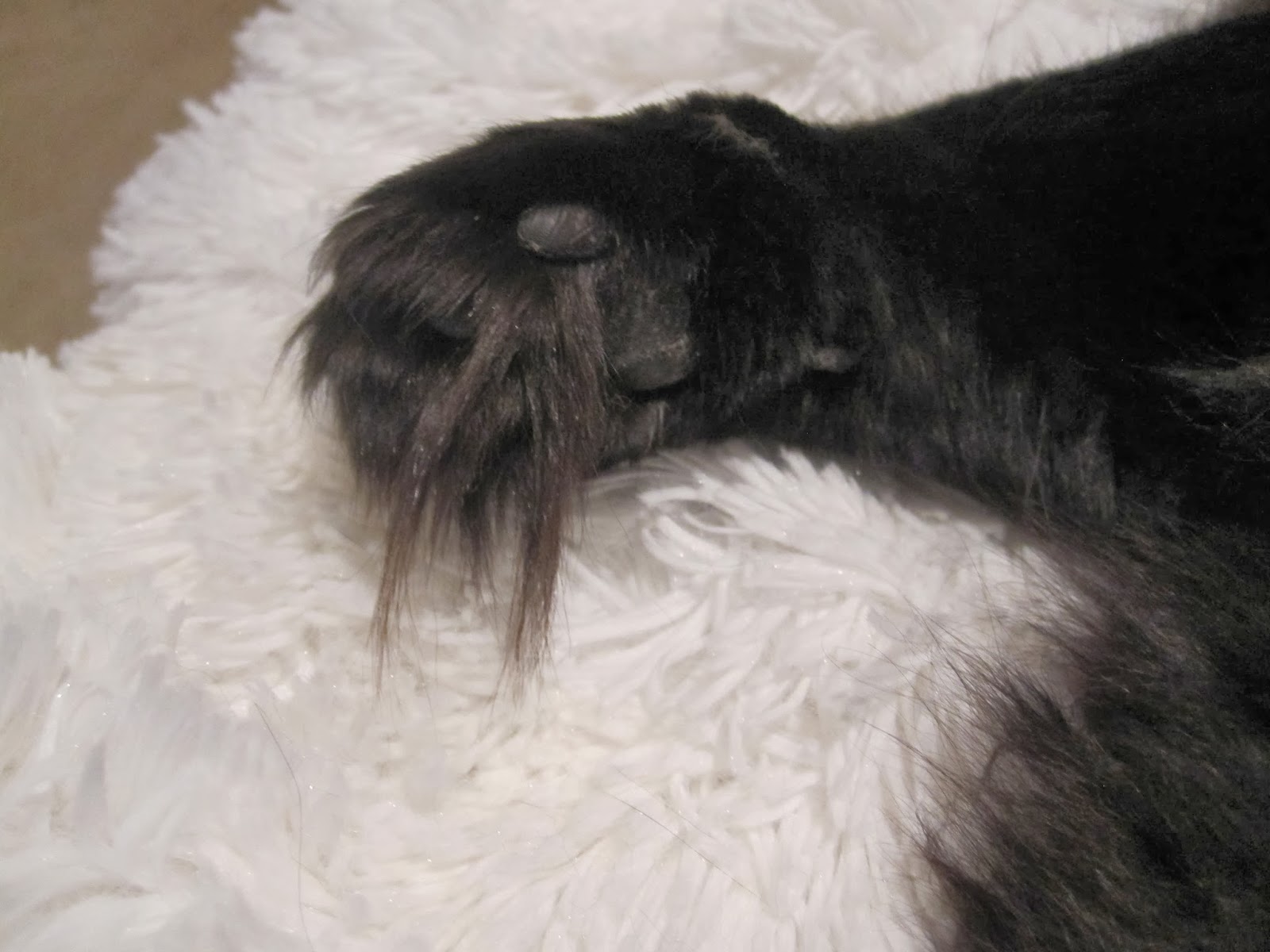 Did I mention his magnificent paws? 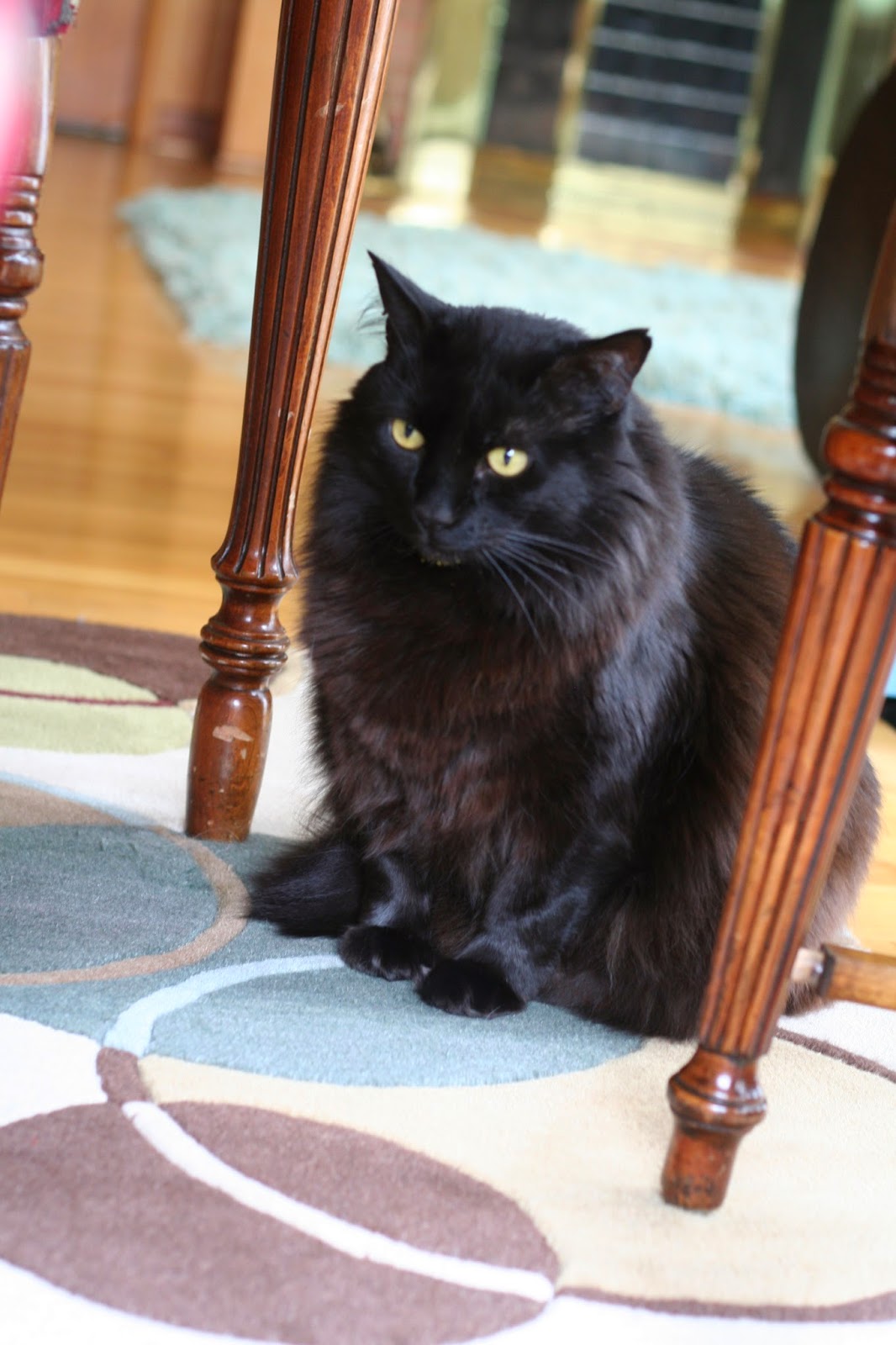 When we rescued Nigel, we had to be extremely patient and kind.   I made a promise to him that we would let him adjust in his own time frame.  We had never experienced a cat that took so long, but we were prepared to give him all the time in the world.  It was about 5 months before he could fully integrate.
I also made other promises to him.
That he would never have to go outside ever again.
That he would never be hungry.
That he would never be cold.
That I would always be there for him.
That I would love him forever.
In the end, as hard as it was, I am grateful that we were both home with him when he started showing his critical illness.  We were both there with him, both holding him until his final breath.
I was able to keep my promises to Nigel. 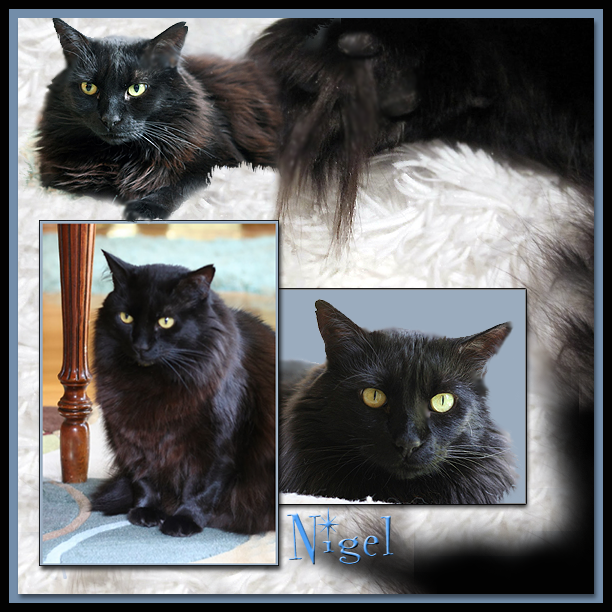