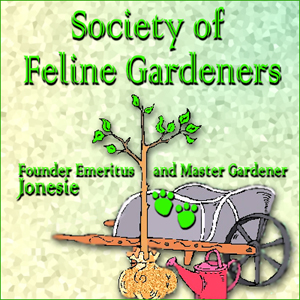 Life in my garden is not the same without my sister Bennette.  We are adjusting slowly, but in some ways we will never be the same.   It seems to be hitting our woofie Grete pretty hard.   She takes good care of us kitties and for her to lose one of us is devastating to her.

I've not been doing much gardening yet this spring.   I'll probably be snoopervising planting at the end of May.   I've currently got 3 tomato plants that are in our super cool tent plus my herbs but that is about it for now.

The big deal is our deck project.   Dad discovered that our deck totally rotted out.   He couldn't let me set paw on it and fall through! 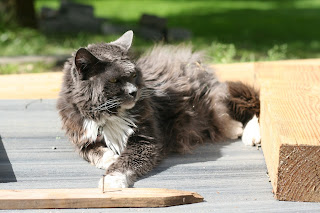 So I'm keeping a watchful eye on his garden construction. 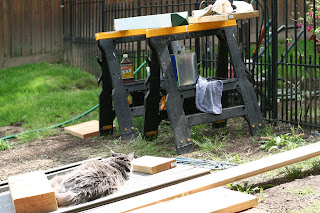 It's not as interesting as gardening and getting my paws dirty.   I stay away from noisy tools. 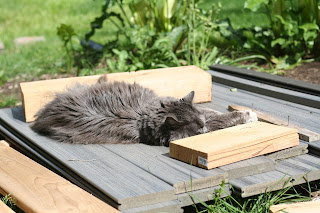 And when I get bored with it all, I snooze on the building materials. 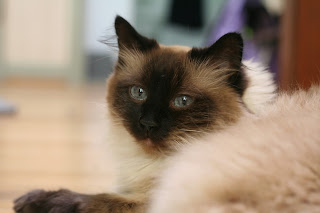 I know it's my birthday and Mother's Day.   I should be celebrating but I'm still having a hard time with losing my good friend and sister Bennette.

I am comforted knowing that she went to The Bridge with her ears scrubbed and all of our love and purrs.   She had so many furriends from around the world, human, feline and woofies too.

Here is a picture of us during our happy times together. 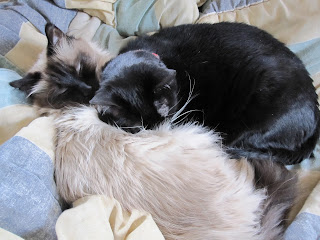 Bennette left for the Rainbow Bridge on May 4th.   She had been ill for awhile, but it was still sudden  and a shock for us.

She wanted to say goodbye herself.

I came to my family at the very end of September in 2008.  This is how they first saw me.  I had made a nest in one of Jonesie's gardens.  I knew I was charming them because they started calling me Miss Got Milk because of my milk mustache.

On October 1st, I took advantage of a rare opportunity.   Grete, the new woofie at the time, was spending the night at the vet recovering from the first of her elbow surgeries.   With the coast clear, being the opportunist I was, I made my move.   It was my target's mom's birthday and while they were having dinner I knocked at the door.  Like a proper visitor.  They opened the door and I simply walked in.  Like I owned the place.   The best birthday present my mom ever received. 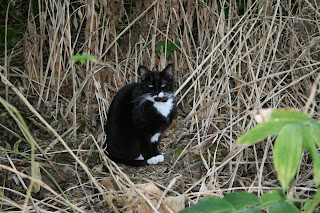 This next photo is about a week later after I had firmly established myself as a member of the family.   They shortened my name...Miss Got Milk to  G-Moo, a nickname that stuck with me always.   I was formerly named  Bennette, after another loved stray Benjamin.  Mom was fairly certain we were litter mates. 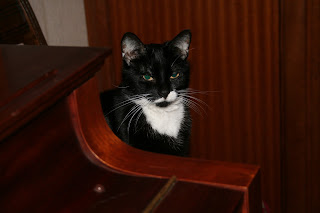 I established myself as totally in control and in charge.   Mom and dad said they had never met a cat who was so totally self aware and comfortable in her own fur.   Ha!  That was me!  Don't let this picture below fool you.  I liked to throw mild punches, but I adored my best friend Ellie. We were very close and were often sleeping together.   I always wished that Ellie was my mom.  I adored her giving me baths. 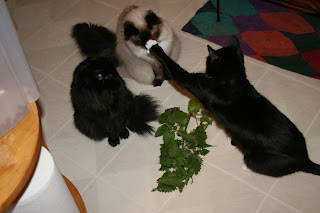 I was always willing to curl up and help my mom watch The Tour de France. 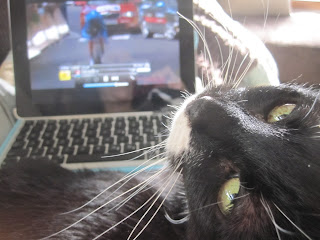 I had a very kissable face. 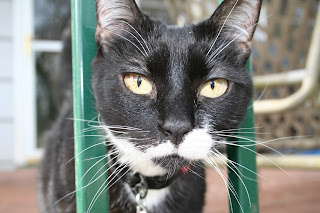 I had  8 of the best years of my life with my family.  I never did reveal how I became homeless so that part of my story will always be a mystery.  What I do know is that I chose my new family well.  We had the best of times together.  I was well loved. 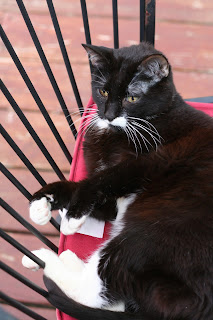