Thursday in the Garden with Jonesie

This week I have to let you know about the failures in my garden this year. I was not diligent enough about my squashes and I let a cute little beetle live. It's really quite adorable, looked harmless enough, but apparently this little monster is a cucumber beetle and it carries bad stuff that infects poor innocent squashlings. 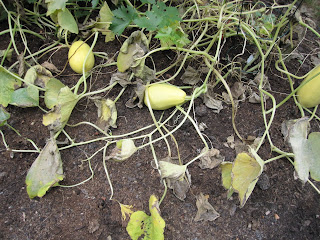 We are getting squash, but not as many and they won't taste quite as good. Sigh. I can hardly bear to let my mom take my picture in front of them. The shame of it all. 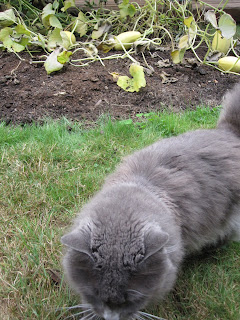 I just can't take much more...first my sister Ginger goes on and on about how my peppers will never change color...then this...powdery yuck all over my glorious squash plants. How can I carry on as a master garden cat if this happens? I think I will take a nap in the grass after a stroll in the nip garden. 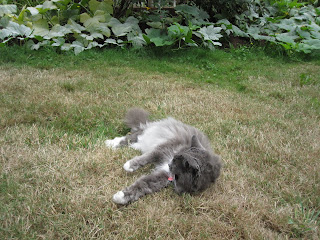 ::::::start dream sequence:::::
Jonesie starts to twitch...she sees that Cory is at the computer again...and she's pawing at the phone too. She meows about something, but Jonesie can barely make it out..."magic pixie pepper powder".....Cory meows softly...."thank you Maggy and Zoey"...."I'll sprinkle this on Jonesie's peppers"...."she'll never know"....
Jonesie tosses and turns and in the next second she sees another scene...it's Cory in the garden. Jonesie knows this can't be true because Cory doesn't go outside but it all seems so real...and everything is moving in slow motion. It's a bit fuzzy at first, but then Cory comes in to plain view. This is what Jonesie sees: 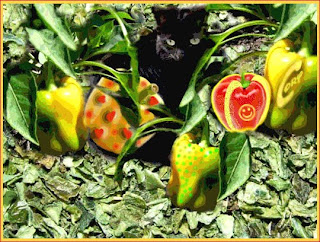 :::Jonesie's eyes open wide and she awakes with the flick of her tail:::
I wake up in a cold sweat! I know it was all a dream...but somehow I'm thinking I've got to give Maggy and Zoey a call...you never know. It's too late to save the squashes but the peppers are still doing ok. Maybe there is such a thing as magic pixie pepper powder. 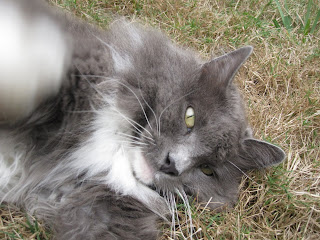 In the meantime, I'm swearing off catnip for awhile. Hopefully my good friend and garden-cat-in-training...who is a whole year old now...yes Alfie, is having more success in his garden this week.

We had that happen to our squashes last year. I hope you do better next year.

Sorry about your squashes!

It has been a furry bad year fur gardens everywhere. Momma had to work really hards ta keep my 'nip up to speed.

Jonesie, yoo are still the bestest gardener 'cos even top gardeners can't save every plant! And now you've learnt a lesson yoo can prevent it happening next year, can't yoo? I'm always killing things off (accidentally of course) 'cos I'm still getting my green paws!

You're an excellent gardener so we know that he squashes are just a small setback.

Um...maybe you need to lay off the nip for a while!!

Jonesie, you tried your best with them squashes...it's hard to control those pesky bugs...but those peppers...we're not sure you want to try that magic pepper dust....

Silly Mom forgot to tell you that we gave you an award on our blob this morning!

You're still a great gardener, Jonesie! We hope your squash get better soon!

Jonesie, we have to tell you a secret. The weekend before dad left, he got cat grasses and herbs for us. He is coming home tomorrow. So today, mum went out and bought replacement grasses, to try and hide that between the three of us, we couldn't keep any of them alive. You are a gardening extraordinaire, in our opinion!

never trust a beetle Jonesie. You can't win em all, Squash is Mom's favorite though.

Jonesie, I think you are way too hard on yourself! You are an excellent gardener -- sometimes you just can't fight mother nature.

Yes, it would appear that Cory became entwined with the Zoolatry purrson and ended up in your dreams. I think the upshot is that your garden is magical because so much good stuff has come out of it. Never mind the things that didn't quite make it. It was still a resounding success!

Not to worry, Jonesie! As long as you keep learning, next year's crop is bound to be even better!

Jonesie it is too bad about your squashes - but I thought the peppers had started to change? And green peppers are tasty too (just not quite as much). Maybe the squash won't be too bad - and at least you will have some to eat, if not as many as you thought. Hopefully next year that mean old beatle won't come back.

Iffen ya think yer squashes are bad, ya should see our corn. MOL!!!

Jonesie, do not worry about those squashes. Our whole garden looks like that!

That sure is a bummer about the squashes...but we bet the peppers will be just fine.

We're sorry to hear about your squashes, but try not to worry too much. It happens sometimes. :( Darn beetles, next time you'll know not to be so forgiving!

PS - had a few too many niptinis at Alfie's birthday party, didja? ;)

Hi Jonesie! Thank you for revising my stealth crawl. It is pawsome that you offered to be the back-up for chasing off Dado. That guy is so cheeky! At least he hasn't discovered our four precious cat nip plants yet...
Purrs, Siena