This is Ginger when she first arrived:

Ginger moved in on us 1 year ago this weekend. Mom and dad went in the backyard and saw her under a bush, talking up a storm. She had quite a story to tell. Mom and dad weren't sure if she was just mouthy or if she needed help. Mom talked to her for awhile and then sent dad back to get a bowl of food. According to the story I was told, she dove on the dish and inhaled the food. Ok, that answered that. She needed us. We had to monitor how much food she could eat because she inhaled everything we put in front of her. We were afraid she would pop. Ew! At least she slowed down and is sharing now.
So it's been a year. Ginger is a bit of a drama queen. She weighed 10 pounds when she moved in and she is now up to over 15 pounds...that's me+momma=Ginger.


Ginger mostly eats and lies around. That's what Ginger does. I like her but she is too lazy to chase me. 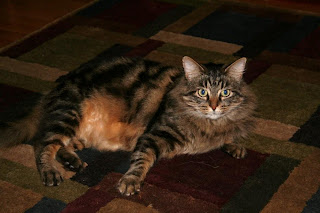