Ellie is my momma. 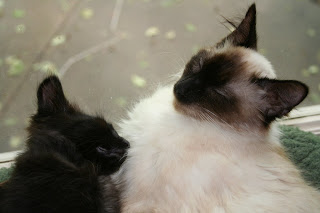 My momma Ellie had 6 kittens to care for when we were abandoned in a trailer in Tillamook. All of the kittens were not from the same momma, 4 kittens were from one momma and my brother and I were from another momma. When the rescuers found us, the thought the 4 kittens were Ellie's kittens, and my brother and I were orphaned from a different momma who didn't survive being abandoned. All of the other 5 kittens, including my brother looked like my momma. I was the only one who looked different. Anyway, it didn't matter to my momma Ellie, she took care of us all just the same. It was hard for me because I was smaller than the others. The 4 other kittens were a bit older than my brother and me so they were bigger. If it weren't for my momma, none of us kittens would have survived. If it were'nt for the United Paws people, we wouldn't have survived either. My momma doesn't like to talk about it too much. All I know is that I had to share her with the other kittens and now I don't.
My momma is beautiful, kind and smart. I guess it doesn't matter if you've got it all, you can still end up abandoned and alone.
Posted by Cory at 9:34 PM