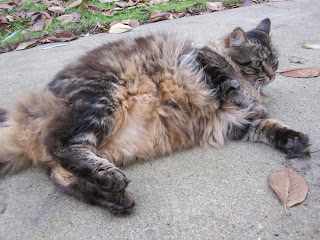 Hi there!  There has been so much going on around here with the holidays and all that.  Did you know that mom and dad gave away our couch before we got our new one?  We're still waiting!  All this ginger floofiness needs her couch.  Mom and dad are just lucky we've had a few dry days so I can hang out outside.  I've been promised that the new couch can hold ALL of us.  I'll believe it when I see it. 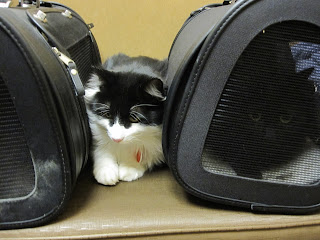 There was a huge fuss this weekend when 2 of my brothers and my sister Cory had to go to the v-e-t.  You wouldn't believe the racket!  I of course NEVER fuss when I go to the v-e-t.  I mean they should have known it was no big deal...Corywhippersnapperbabykins only needed an update on 1 shot.  But her eyes still got big as saucers.  She still pouted to her momma Ellie. Figgy needed a booster and his official microchip!  The doctor said he was a brave boy and was very good.  I'm laughing because when he moved in here, he weighed 8 pounds and now he's 13 pounds.  I'm not the only ample one around here...even if I am a girl and he is a boy.  Madison just needed a check up on his itchy skin.  So...speaking of ample me...did you know a certain VERY handsome and BIG boy has been leaving me flirty messages?  Cory tried to chase him off, saying I'm a big girl and a bit of a handful.  Did that scare him away?
Nope. 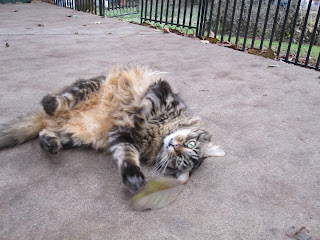 Here's waving paws at you my big silver tabby down under lover boy!!!!  I love a boy who appreciates a girl with a healthy appetite!

I hate having to go to the vet too, although I am very stoic about it. I just GLARE a lot.

Ginger, we love Tuesdays because we get all the gossip, er, um, news!

Who love the VET must be wicked !
Every times, my dad try to get me to the VET , I have to play " catch me if you can "

You look like you are really loving your roll on the ground, Ginger. Hope everyone who had to go to the vet survived without feeling too bent out of shape. Wow, Figaro has packed on some pounds!

Vets are horrid but you're obviously very, very brave!

The humans here got rid of their old couch and it was YEARS before they got another one! In fact, they moved to a new house and lived there for THREE YEARS before my human decided on one she liked. I hope your humans have more sense, and that one is on its way to you right now.

(Yes, I've totally avoided the part about the vet visit. Those make me really scared and nervous, so I sort of skipped over it once I saw everyone was okay.)

Just don't mention the V-E-T. Umm, Fui, eh? I have to go and check out the rumours. Be back soon.

That is one lucky Mancat sweet Ginger...thanks for brining us up to date on the happenings!

Well Ginger, I've flirted with you too! I happen to think you're gorgeous. Your beau is a lucky mancat!

You are a very bootiful girl. Sorry to hear you already have a beau ..... but if you every change your mind, I'm available.

Wow...three of them to the v-e-t at once!! They musta been serenading your mom! We're glad they all checked out okay!

You're still waiting for your couch? Wow, we thought you got it ages ago.

All 3 to the vet at once? Holy cod! Our mom says it's hair-pulling just taking two at once (to save on taxi fare). We're glad it all went well, though!

You always have to good dirt Ginger. Glad everyone is okay. I used to be ample, but I've trimmed down now. I like an ample kitty.

For a minute I thought you were "Cougaring" it up with Lishy.

Woo HOOOOOOO! Romance with Fui is in the air! We LOVE it!!!!

Well we always make a fuss abowt going to the vets too. That way we get more TREATS afta.

That's so exciting, Ginger, that you have a gentlemancat caller! And one who loves a zaftig ladycat at that! I think you hit the jackpot or is it the Fuipot!!!

Sorry 'bout the couch, but these things happen, and I'm sure if your folks say the new one will be bigger and better then it will.

As far as Figaro gaining weight, it just speaks to the good care and loving he is getting. He looks very healthy and happy to me.

I'm glad you have a nice mancat in your life Ginger, I know he will find your spectacular tummy floofs irresistable :-)

My boys have their paws crossed that your new sofa will arrive in time for christmas! I hope that Cory, Figaro and Madison have all recovered from their ordeal at the vet!

Hi Ginger! We think it is too bad that all three had to go to the vet at once. Your mom is brave to bring the whole group. We are glad it was nothing serious though!

And oh, we think it is cool that you have a mancat who is being all flirty with you - we wonder where it will lead!

We have never had a couch here. We seen em in our friends blogs pictures though; they look comfy.

An we wish you good luck with yer new boycatfriend!

We're glad everycat did OK at the Vet ;) We giggled a bit at Cory and her saucer eyes,heehee
Ginger, we bet Fui is crazy for you.You are SO pretty!!!!!!!!
Purrs Mickey,Georgia & Tillie

Well Ginger we will have to go over and meet your Beau.

Wea re going to ahve to go to the
v-e-t in January...yuck!

*painting myself silver and moving to Australia*

Hello my little Ginger Ninjakins. I can say little because I am heftier than you! You've got me all a swooning here.

fluffy love handles. You are so brave. Love Darcy and Bingley xx