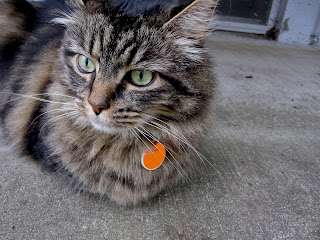 I've been urpy today. More than usual. Mom says I binge and purge. Today I did it so much my mom is a bit worried about me, but I look and act the same and I still am causing trouble...but still mom looks at me that way a mom looks when she's worried. I better not keep it up or else I'm gonna get hauled off to the v-e-t. What did dad say? "well she doesn't look like she's lost any weight"...sigh. Dad's can be so cruel. 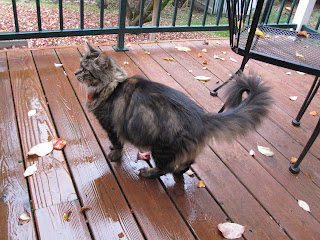 I worried mom the other day when there was a cat fight in the way back of our backyard. She heard screeching and so she ran around to make sure she knew where we all were. Madison, Jonesie and Cecilia were all right there...but I wasn't. Everyone else was inside. Mom got freaked and was yelling "Ginger" "Ginger" "Ginger"...I let her. She even looked in the front yard where I'm not supposed to be. I wasn't there. I decided to let her off easy, so when she came back in the backyard I sauntered right over to her like it was no big deal. She grabbed me and fussed over me. I kind of liked the attention. Ok, I loved the attention. I should try that again. 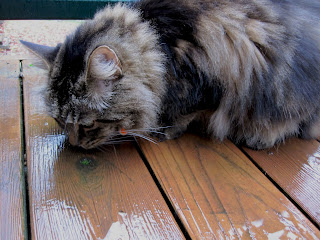 I still like hanging out in the yard even though it's raining a lot. The birdies are getting fed up with it all and they are flying south. I can watch them go. I don't even bother to chatter "goodbye" because they are so high up in the sky. 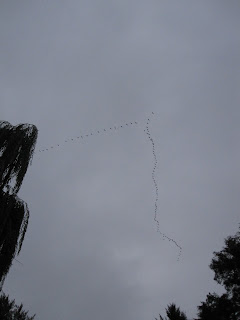 Let's see....what else is going on here. Jonesie has been spending more time in the house lately because it's icky outside. Nigel is trying to cozy up to Ellie again. Just today he was caught sitting on the couch next to a sleeping Ellie. Every time we looked up he had inched his way closer to her until their furs were touching! At least he's getting smarter about it. He typically just takes his big beefy paw and puts it around her neck. Ellie meows her "wookie" meow which means she's irritated at him. Cory has started to beg for any food that looks like it might be cheese....even bananas or pears or anything that looks like white cheddar from a distance. She is SOO disappointed when she sees what it really is. Cory is so obsessed with cheese she had mom join to be a Facebook "friend" of Tillamook Cheese...can cheese be a friend?

Cheese can be a nice friend! I quite like it too! At any rate, you go on the letting the human folks worry! I love doing that!

Oh Ginger, what a sneaky way to get attention. But you be careful outside and take care of yourself especially on rainy days wouldn't want you catching a cat cold

Wow Ginger, you have certainly been busy. We think it is good to beg for cheese. Cheese is very yummy.

Me love attention too, when my human ignore me, I will start making a sound, for example, I scratch the sofa!

This is a great Tattletale Tuesday report Ginger. We hate to hear though that your mom is worried, because sometimes they are right. We hope it's nothing!

You are an excellent reporter, Ginger. I don't think there is much that gets past you!:)

What a lot of news from Casa da Cory! Whew!! Hope you get extra treats for all your work Ginger!

Wow there is a lot going on at your place. Thanks for filling me in. The weather here is not as nice lately and I think it will be getting worse sooner than better.
I hope you will start feeling better and not be hauled off the the vet person, I know they try to help when one isn't feeling good but come that isn't such a nice place to go to.
Hope you get back to feeling better and ignore the dad, that is such a typical things that they would say. What do they know anyway?
When does the garden club met? I don't want to miss it.

Ginger, we are glad you weren't disappeared or injured! And we hope you get over being urpy soon! The v-e-t is no fun!

Ginger, you stays safe now but I knows how it is getting fussed overs cuz I luvs dat too! I sorry to hears about da purging, brofur had been doing dat a lot but once momma puts our wet food back into regular use it doesn't happen any more, I hopes you don't keeps doing it and has to goes to da vet.

Wonderfur report, I misses you guys, momma been purrty busy ties up da puter all da time so I can't comes to visits.

Cory you luvs cheese? Momma says she can gets freeze dried cheese but its supposed to be for dogs cuz us kitties not supposed to has cheese what is up wif dat?

we hopes you get to feeling betters and ther food is nicer to you.

we do the hide and seek alot with mom, well, lucky does, and it scares the you know what outta her too. heheeeee.

OH Ginger, you are such the observant one! Always with tales to tell on your little furmily. They are very amusing, indeed.

Oh you are a little tinker.. Scaring your mum like that.. He he he ... Hugs GJ xx

What a great life you have. Keep it up. FAZ

Cheese is my friend. My good, good friend!

Sorry you are feeling urpy. Do you think you have been eating some leaves or grass outside? That always make me urp up right away, yet I still do it (even if it is just leaves n my deck)> Hope you won't have to visit the v-e-t.

Yeah, the sound of a kitty fight can really get The Big Thing's attention! Even if he can see all of us peacefully inside, he wants to go out to find out who is doin the fighting...

Ginger, we bet you made all that noise in the yard yourself just so your mom would fuss over you! You're pretty smart! And we hope you stop urping....

I can see why Cory is obsessed with cheese...it is a wonderful thing!

Cheese is great stuff. I hope you stop urping soon and don't have to go to the vet, Ginger. Scaring the Mom is fun and it gives her extra exercise.

A friend of Tillamook! You cats are the best! Thanks to your Mom from my Mom.

Wow Ginger that is a lot of news today! Our kitty Kirzon is like Cory - anything that looks like ice cream (mashed potatoes, rice, things like that) he has to investigate and then is so sad when it is not ice cream.

I hope you stop urping soon - tell your mom to keep a really good eye on you and well, she knows what to do if need be - I won't say it here. Plus you are floofy so it is hard to tell if you loose weight just by looking - I had that problem with Floyd.

We used to have that problem with Curzon, and then when Nimbus got sick with diabetes, we had to switch their food. It took a wee time, but one of the added benefits was that Curzon has improved from it being nearly a daily event to maybe a weekly or biweekly event, usually when he's trying to pull up a furball. I can't say it was the food he was on though, maybe he just learned to take it a little slower. Good luck!