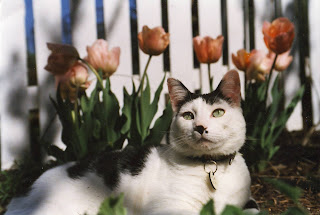 There have been many a fierce fighter in my family, many are featured on my side bar. I will focus today on those who have crossed the Bridge since last Christmas. Every year my mom and dad hang our stockings by the fire. For those who came before, their stockings are hung on a garland around a window. This year, we will be hanging 4 more stockings on the garland. Colby, Benjamin, Lewis and Michelangelo. I have already written remembrances of my dear Colby, Benjamin and Lewis. I have not yet written about Michelangelo "Mikey"...because it's so hard.
Michelangelo "Mikey" came to the family long before I was born. He was found in late winter of 1992, less than 2 years after Roger Ramjet left us. My dad found him in the most unlikely place...on the freeway median strip. He had been hit by a car and was left for dead. My smart dad thought he didn't really look dead, so he stopped and was stupid (according to my mom) and fetched him off the freeway. Mikey was a mess. He had a fractured pelvis and awful wounds. The Vet said that he likely wouldn't live because his bowels wouldn't move because there was terrible nerve damage. My mom said, no...he will live...she just believed in this little boy that looked so much like Roger Ramjet...the nose spot had to be a sign. When he finally produced that improbable poop, everyone did the happy dance.
Mikey did live. He was called Miracle Mikey for a long long time. It was a tough road to recovery, but my mom and dad worked with Mikey and nursed him back to health...his nerve damage wasn't so severe after all. He was my mom's baby. No one messed with Mikey, or there was hell to pay.
Mom and dad took in a couple of strays, a dog...a cat...and they picked on Mikey. They were placed in other nice homes. If you couldn't get along and play nice in the sandbox with Mikey...forget it. My mom said this was because even though he was a tough cookie...he was frail and any rough play could jeopardize him.
According to my mom, he was the sweetest cat on the planet...she loved him so much it hurt. My mom worked really hard to get the picture above with Mikey in the tulips...she took over 50 pictures to get just the right one.
When he started having trouble with his injuries catching up to him she did everything she could to help him. He needed enemas...and laculose all the time. Finally, things just stopped working at all. He was 17 years old.
I always liked Mikey and Mikey liked me sort of. My momma Ellie tried so hard to win over Mikey but he was not going for either of us. My mom said not to take it personally because Mikey was so in love with Maggie that he couldn't fall in love with us. But he did like us. I'm sure of it.
Posted by Cory at 3:01 AM

Thankyou for telling us about Mikey. It sounds like he had a lot of people in his corner, and we think that is a sign of being one cool dude:)

Mikey sounds like he was quite the fighter! What a sweet story.

I love what your family does with your stockings.

What a lovely story. I loves how the universe works, just throws things at you.. You guys were meant to be :))
And I iz sure that he loved you back also Cory :)
It is lovely to remember, with a smile and love in your heart :))

Too many, lost too soon.
Rainbow blessings to all.

Your mom and dad sound like special beans....and that picture of Mikey is purrfect!

Thanks for sharing the story about Mikey. I can tell he was very special! And that picture of him in the tulips is beautiful.

Cory, we loved to read the story of Mikey! He really was a fierce fighter!!! He had wonderful help from your mommy and daddy, I know he was glad they came along and found him that day!
~The Creek Cats~

What an amazing story...oh indeed a Miracle Mikey...what a handsome handsome mancat you were and those 50 pictures were worth waiting for that one special one that was purrfection. Your Mikey is always with you, he resides in your heart and in your memories, nothing can ever take that away.

Awwww, ((((((((huggies))))))) - Mikey sounds like such a speshul and wunnerful kitty boy, and yur Mom and Dad are such loving and caring beans.

We love what yur fambly does with yur stockings, too. :)

Kittyhugs and purrs from MaoMao.

Wow, 17 years? Mikey sure fooled everybuddy, didn't he? The photo is stunning!

Mikey had a great life, thanks to you, and he was well-loved. That photo in the tulips was worth the wait -- just lovely.

We're reading this as part of your first blogging anniversay ~ and we hafta admit we wept a little. mikey seemed a veru speshull and much loved cat and we know he is still missed by yoo all.

PS: Mikey could be a male version of Lily ~ can yoo see the similarity?