Today we celebrate Cecilia's first anniversary with us. Her official arrival in our house was January 1st, so I'm a day late with this (oops, yesterday was all about me...). She was not a happy camper when she arrived. She had been hanging out in our yard for about a week or so when we finally lured her in. She was sick and later we discovered she had asthma. This picture was taken 1 year ago today after she settled down for a nice warm nap on the dog bed. Mom and dad tried the usual routine...scan for microchip, scan all missing cat ads, look for lost cat posters, post found cat posters and ads...ask around...nothing.

Cecilia never did adjust to life in the house. She terrorized Ginger and would not let her get to the litter box! She is still wary of humans and will allow only brief scritches. She is now living in the workshop with Madison and enjoying the yard when the weather is good. She and Madison get along. They both seem very happy together. There is rumor that they were actually on the same large dog bed...not yet touching, but very close! We are still hoping to get a picture of it, but she is wary of the camera too. Cecilia has gained a couple of pounds since her arrival and her asthma only bothers her occasionally now. Happy Anniversary Cecilia! Madison missed his opportunity to post his baby pictures yesterday . He was born in our friends back yard to a feral momma. He is such a big cat now that it's hard to remember that he was a little tyke at one time. Here he is with our friends Lynn and Michael when he was just a wee little baby back in 1996: 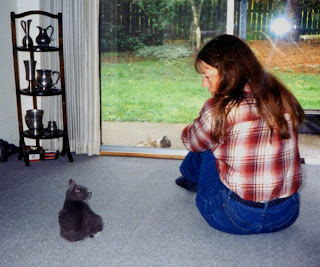 Madison came to live with us when he was about 5 months old. Here is he showing us his lifelong fascination with noses! 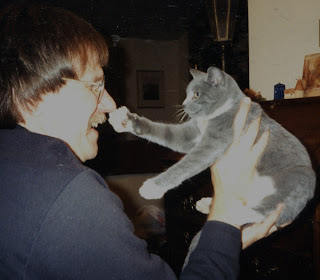 Madison will celebrate his 13th birthday on May 13th this year. He is now the senior elder statesman of the family.
We are currently trying to figure out if one of our regular visitors to our yard "Bojangles" is homeless. He has been a regular in our yard for a couple of years, usually just passing through and eating a bite or 2 at the food bowl. He had a collar with a bell, but that has been gone for about a year. He looks pretty good so we have been thinking he has a home. This week, we have discovered that he's been sleeping in one of our dog houses at night and he's been eating a lot, not just the usual nibble. When we go out first thing in the morning at first light, he's there. Let's hope his humans are just away for the week. He's wary of us and so we can't get close enough to do a good inspection of him yet. He looks a lot like Jonathan.
Posted by Cory at 3:01 AM

Labels: Cecilia, Madison, we hope Bojangles has a home

And my goodness, Madison, we love your baby pictures! How cute are you gazing up at your foster mum:)

We will purr for Bojangles. We are glad that he is in a safe environment with you guys, at least.

Happy Gotchaversary, Cecilia! We are so glad you and Madison get to hang out together!

Happy Gotcha Day, Cecilia! You sure found a great home!

Madison, what a sweet wee kitty you were!!

Sure hope the back yard visitor has a home and just likes to visit and nap. They always know where to go, don't they!

Happy Gotcha Day, Cecilia! You are a beautiful girl!

And Madison...what a cute kit you were!

Happy Gotcha Day, Cecilia!! It's so great that you snagged yourself a really special loving forever home!

Madison was very cute - and still is!

And what a lovely name: Bojangles - we will purr for him too.

You really landed on all four paws when you came to live at Cory's house. We're so glad you have such a great place to live and have a good friend in Madison.

That picture of Madison and the human nose is priceless! He's a gorgeous mancat (and was a super kitten)

Here's hoping Bojangles has a good home to go to. We know you will help him if he hasn't as you are good cat people who have a sign up outside your home that only cats can see it says "free luxury boarding and endless supply of love and food here!"

we is purring for Bojangles too.

Cecilia is one lucky girl! We are so happy that she is living in your workshop now and is safe and loved!!! What a precious little baby Madison was! We pray that Bojangles has a good, loving home! Thank you for watching out for him as well! *purrs*

Happy Gotcha Day Cecilia!!!!! Sounds like you have a true bosom buddy in Madison!!!

Happy Gotcha Day Cecilia! Thanks for coming by and visiting...
--Jasper

I love all those kitten pictures!
Those were the good old days, eh? When we could get away with anything 'cause we didn't "know any better" Hah!

Madison you was such a sweetie!!
Do you like noses like I does?
I will reach out with my paws for Momma and daddas face, but it is to pull it in so I can get and give kissies. Is that what you are trying to do? :)
dear Bo jangles please find a way to let Miss Cory know ifs you need help or not.
We has a kitty that visits every night that we can't get close to to check out and his furrs are too long to see if he is hungry or not.. is very sad for Momma.

Happy Gotcha Day Cecilia! We're glad that you do ok with Madison in the workshop. Sounds like the purrfect spot for you.

Thanks for the information about asthma that you left on our blog. Maw says we are moving soon, and we will have all wood and ceramic floors that she will use vinegar and water to clean. She heard that it is environmentally friendly, but she didn't think about the allergens part of it. She is going to check into bronchiodilators.