Tuxie Tuesday- How Bennette Got Her Name

When Bennette arrived in our yard a little over a month ago, she initially set up camp in the garden. She was hanging around for about a week before she literally pounded on the front door and meowed loudly. We opened the door to see what the fuss was about and in walked Bennette. We didn't call her Bennette at first, mostly because we didn't know who she was or what she wanted. We started calling her Ms. Got Milk because of her milk moustache. Then we started calling her G. Moo (kind of like J. Lo). We were pretty sure she was homeless, but we did the obligatory scanning for the microchip, looking for "lost cat signs", asking neighbors, checking all the lost cat postings, etc. Nothing.

The new kid on the block needed a real name.
Even though she was new to us, this little girl was amazingly familiar. Our dear guardian angel Benjamin passed away in April of this year, only 6 months after finding us. He was an absolute mess when he arrived. He camped out in the backyard for a month before he agreed to trust us. His teeth were horrible, he had an ear infection that left his left ear permanently tilted, he was not neutered and he was lonely. We did everything to get him set on the path to health. We initially thought that we'd find him a good home since Ginger just moved in 1 month before he showed up. When we got to know him we realized he was older and likely would not be around a long time. I don't know how we knew but we could tell. 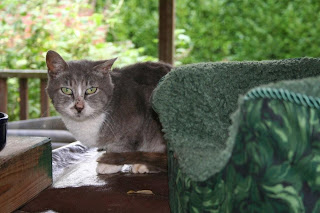 Benjamin adjusted to life in the house easily. He took over my mom's lap, and we all let him do it. He had a way of just getting what he wanted in a very quiet and insistent way. Kind of like Bennette. But that isn't what connected him to her. They walk the same, they talk the same, they have the same look in their eyes so that looking into Bennette's eyes are just like looking into Benjamin's eyes. They are the same size, they have the same tail.
That's when we figured...wow, this must be Benjamin's daughter (he was not neutered until we found him afterall...).

So the naming of little G. Moo was an easy choice. She is Bennette, named after her likely papa, Benjamin. It's comforting to have her with us, even if she is a stinker sometimes. The vet thinks she is about 3-4 years old, so we're hoping she has a long and happy life with us.
Posted by Cory at 3:01 AM

Hello Bennette, that is a pretty name - we are assuming it is similar to Annette. We are sorry that Benjamin wasn't with you longer. Thank you for the award. We are sorry we didn't stop by earlier to pick it up. Mom has not been helping us visit much. But hopefully we are back. We look forward to getting to know you better.

Bennette is a very interesting looking girl! How lovely that you have a living reminder of the lovely Benjamin. We are so happy that he found peace, love and safety with you before he passed.

Great story Cory! We were just reading about your guardian angel Jonathan and how he lived to be 20+. That gives Rambler lots of hope!!
~The Creek Cats~

*wavin paws*
Hiya Bennette...we love your name and we think you are beautiful. What a wonderful story and so moving we are glad you are safe from the outside and have a loving and happy home ...

That's a cool story about Bennette!

That's a wonderful story and I am so happy that Bennette found you just like Ben did!

What a heartwarming story... we have lost our feral kittens but this gives up hope that someday, someway they might find their way back to us...
Bennette is blessed, as are you.

Hello Bennette! It is a lovely story of how she found you.

That is a wonderful story about Benjamin and Bennette. I am glad that Benjamin got to live out his final days with you in peace and love instead of cold and alone.

Thank you for sharing this lovely story about Benjamin and Bennette! We are very glad they both found you! Isn't it always amazing how we cats know just where to find the cat peoples?

Bennette is a lovely looking kitty :)
I think it is neat that she might be Benjamin's daughter as he was a much loved cat :)
Welcome Bennette!!
Purrs Mickey