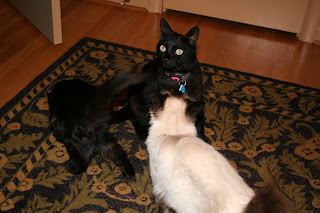 Lewis left us on August 11, exactly 19 weeks and 6 days after his best friend Colby left us. My mom had to fill me in on history to understand why this is important.

Lewis came to my family long before I was born. He showed up in early September, sometime around the Labor day weekend. Colby arrived at our house before I was born too, but I was told it was just about exactly 20 weeks after Lewis arrived. When Colby arrived, all the kitties ran and hid. Lewis ran right to her like he already knew her. They were best buddies from day one.

Lewis was known for being a bit of a neighborhood bully, a king in his own mind. He fought off neighborhood cats fiercely, but he preferred to scream at them very loudly in order to avoid the fight. He always was misplacing his collars and tags and he rarely wore his "Lewis" tag. He went under an alias much of the time because my mom always made sure he left the house wearing some sort of id, even if he was under the assumed name of TS Eliot or Scrapper John.

Even though he was a bully, he had a major soft spot for me and my momma, and we washed him all the time. We promised to keep his secret of being kind and sweet from the other neighborhood cats to maintain his image. He also didn't want word to get out that he loved burying himself in soft blankets for an afternoon snooze. He loved sharing a carton of yogurt with my dad.

I guess looking back with my mom at the calendar it's no surprise that Lewis left us just shy of 20 weeks after Colby left...almost exactly the same amount of time he had with the family before Colby arrived. They were connected. Kind of like my momma and me but different.

Colby and Lewis are together again, chasing squirrels forever.
Posted by Cory at 10:34 AM