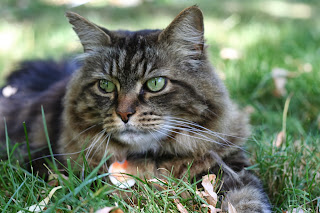 I can't believe she stepped on you! But at least she treated you well after. Did you get treats too? To make up for it? And purrs to Madison.

Ginger, the same thing has happened to Binga, twice! That's right, she has been stepped on two times (at least) by my human! And yeah, getting all dramatic about it really does get attention! And of course Binga was fine!

P.S. It still looks like that outside down here in L.A., so you would have had me fooled!

Oh no!!! That had to be traumatic...we hope you continue to get lots of extra treats and love!!

You're a bit of a Machiaveli, aren't you Ginger????

Milk it, Ginger. That will teach her for not paying more attention to you.

Hi! Nice to meet you! I'm Crepes! It's still kind of warm here, so we still have Crepes. Totally PLAUSIBLE photo. - Crepes.

That happens to us sometimes too. It is a great way to make the humans feel bad and get some extra attention from them.....if only it didn't hurt so much!

She STEPPED on you?? woh.. and you didn't get hurt? and she gave you extra treats and love.. oh please don't tell The Crew about this.. I do not want them dive bombing under my feet..

I am glad you got lots of cuddles and kisses after the terrible trauma of being stepped on. Humans! They always try to blame us by saying we get underfoot when it is obvious they aren't looking where they are going.

Yikes, poor Ginger! Sometimes Mom steps on Saku too 'cuz he is quicker than her, MOL

Making mom feel guilty and getting extra lubbing is almost worth the pain, MOL

Better a Summer photo than no photo at all!

Please tell me you also got treats? I sometimes get stepped on too - always milk it until I get a treat!

Oh, no! She stepped on you? If it didn't hurt much maybe you can slip a toesy or the tip of your tail under her foot now and then and you can get picked up, loved on and get more attention that way. Maybe even get brushed. Hugs and nose kisses

Something tells us you may be trying that trick again. Purrs and hugs, Lily Olivia, Mauricio, Misty May, Giulietta, Fiona, Astrid, Lisbeth and Calista Jo