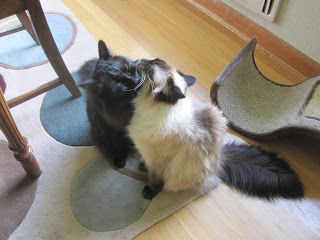 Isn't that an Olympic sport??? Should be. Now if you could do this with three of you, I'd REALLY be impressed.
; ) Katie

That is sum fast and furious washing you two are doing!

That is quite a washing event. Herman and I start washing each other sometimes, but it usually ends in a rasslin' match.

You two are just best buds! Around here, that kind of washing ends up in wrassling!

You missed a spot right over there, Ellie. No, a bit to the right...

Aww, that's LOVE-washing between a Mam and her girl.

OMC, we can't figure out who won that competition! But at least you both are very clean!

You two are so precious! Mom said she has NEVER seen such a sweet and dear thing as this. She said thank you for posting it and she'll return to see it again and again. xoxox

Must be a mother-daughter thing...most baths end up as wrasslin matches!

Mum was amazed at how long the baths were lasting for - we are more of a spit and a lick!
Luv Hannah and Lucy xx xx

So amazing we just NEVER see anything like that in our house.

Wow, Sassy won't even let me get that close, let alone wash me. I am jealous!

Awwwwww! Truffle likes to give Brulee a bath, but Brulee rarely reciprocates!

We do that but then someone always puts on the bitey after!

Well, that was vigorous, wasn't it? The Human says that her Boys Who Came Before ME always ended that kind of activity with a nice bout of street fightin'. XOXO