Today we remember those who came before.  Those we lost to cancer. 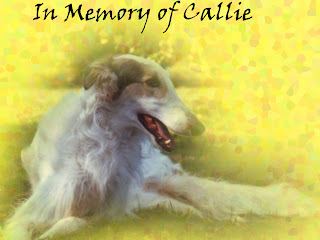 Our woofie Callie was born in 1980.  He was good pals with Morgan, mom's first cat and soul mate.  Callie was a beautiful boy who was diagnosed with bone cancer when he was 8 years old.  He had a rapidly growing tumor on one of his hind legs.  It was very aggressive and he was only with our family for 3 weeks after his diagnosis.  He left for the Bridge in the summer of 1988. 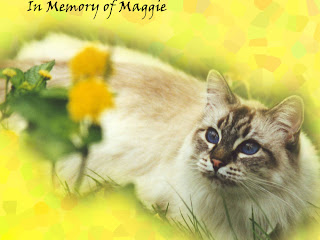 Maggie was the light of mom and dad's life.  She was found, hungry and lost in a local boathouse back in 1998, only a few short months after moms beloved Morgan went to the Bridge.  When she started getting ill in the fall of 2005, mom and dad did not want to believe she could be leaving.  They did EVERYTHING they could to save her, but during diagnostic surgery, she was found to have an extremely aggressive form of bile duct cancer and the v-e-t said the kindest thing to do was not recover her from her surgery.  Mom and dad still miss her every day. 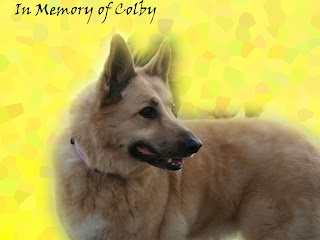 Colby was the woofie who came before me.  She was 6 years old when she was adopted from the Humane Society in 2000.  Mom and dad waited 2 years after wonderdogborzoiextraordinaire Gracie went to the Bridge before adopting another woofie.  Colby lived a very long and wonderful life, but she started getting ill in the winter of 2008 and she was diagnosed with liver and pancreatic cancer.   She went to the Bridge on March of 2008 at the age of 14. 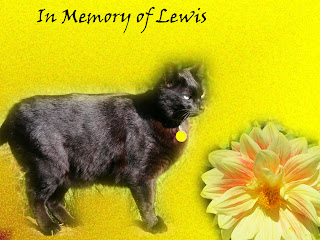 Lewis arrived one fall day in 1999 and just moved in on the family.  He was like Cory...black panther kitty on the outside with solid Meezer under the hood.  Colby and Lewis were best friends. It was Lewis who taught Colby how to hunt squirrels.  When Colby passed away, Lewis was never the same.  Lewis started losing weight and then started failing in the summer of 2008 very quickly.  He passed away in August 2008. 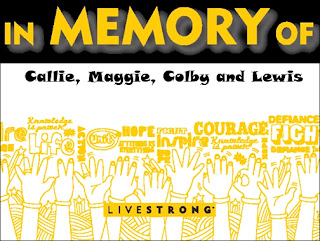 We wag our tails and purr that there will one day be a cure for cancer. 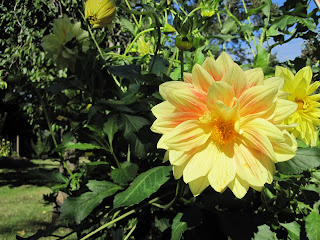 Here is a slideshow that was created by members of the CatBlogosphere with special thanks to Samantha, Clementine and Maverick's mom.  Big thank you's to Milo and Alfie's mom and Maggy and Zoey's mom for all their work bringing us all together today.

I'm remembering those who lost the battle and celebrating with the survivors.

We are going to celebrate LIVESTRONG by eating healthy and loving one another.

WE are celebrating in pink and yellow today!

Gosh how sad. We're hoping this day will help people and cats and dogs find good information and help.

We LiveStrong with you and we StandStrong with you in the battle against this horrible disease and in honor of the valiant soldiers who have rode into battle to defeat this detestable foe.

Thank you from our hearts for supporting LIVESTRONG day by going yellow. We had no idea that so many of your furry family had died of cancer ~ we are so very sad and sorry.

Blessing to all those who are currrently fighting cancer, are cancer survivors, or who have lost their lives to this terrible disease.

Love from Milo and Alfie, Mom-Jan and our Dad xxxx

wow, we are moved. Take care and have positive day. Love darcy and Bing xx

We are sending lots of love and purrs to your family today. We hope they find a cure soon.

We, too, are yellow today and are sending purrs and Light to All Beings who have been impacted by this disease.

For all those loved and lost,
for all who fight the fight...
we purr and we pray, today on
LIVESTRONG Day,
and everyday.

That was a great tribute to the Ones That Came Before. I hope that with all the powerful energy generated today all over the world, a cure will be found that much sooner.

What a touching post. Hugs to your family and we're purring HARD for a cure to be found.

What a wonderful post. Today we're remembering those who are fighting hard against cancer and those who have sadly lost the battle.

We hope that someday soon Cancer will be history

What a lovely post! We are purraying for a cure!!!

It's always nice to remember the ones who came before.

We purr for those we have lost and for those who are still struggling with this terrible disease. LIVESTRONG!!

We hope that one day this terrible disease will be gone and there will be no more need for a day like this. Until then, we LIVESTRONG.

We send purrs to you today in honor of those you have lost. It is so important that we LiveStrong together.

Thank you so much for telling us about Callie, Maggie, Colby and Lewis and for showing their wonderful pictures. We are so sorry that your family has lost so many beloved pets to cancer. One day we hope there will be cures for all different types of cancer.

You guys have lost a lot of beautiful friends and we send big purrs! We love your post.

Goodness Grete! Your family has lost so many to cancer! We are purring for all of them today!

This is a beautiful tribute! We're purring in memory of Callie, Maggie, Colby, and Lewis.

Love and purrs from Franklin, Dobby, Tasha, and mom Katie

What a nice memorial, beautiful memories..

That is a lovely memorial.
Livestrong and live well :)
Purrs Mickey,Georgia & Tillie

Very nice post for LIVESTRONG day. All of us at Mumsy's leave you hugs and nose kisses.

What a wonderful post...so many loyal friends said good-bye, it is so sad, but lovely that we honour them here today! My gosh didn't Maggie have the most fantastic face :-)

Bless your hearts - that's a lot of times to deal with the horrible cancer. The Ones Who Came Before were very lucky to have had your parents to help them through such a nasty time. We're purring for a cure.

Purrs to you on all of the losses you have seen to this nasty disease. Let's hope someday we can say 'remember when people and pets got cancer?'

What a lovely tribute to the ones who came before.

Purrs that they find ways to discover it faster and help people and furries survive it.

Very nicely yellow Cory... We hope lots for all.

That is a lovely tribute to the ones who came before.
We honour those who have survived cancer, and remember with sadness those who didn't.

I was not aware of LIVESTRONG until I saw the Creek Cats blog today. I love your tributes and theirs. How ironic that it fall exactly one month after I lost Salem to liver cancer. He died 14 months and 1 day after my Max died of liver cancer. I miss them both everyday. It was less than a week for both from the time I noticed they were ill until they passed.