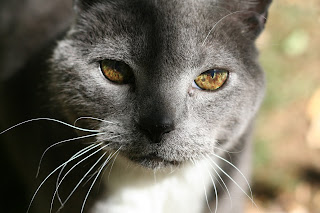 I am the only kitty here who was around on September 11, 2001.  I have meowed to the rest of my family about what it was like that day.
Mom usually would leave the house early for a row on the river, but that morning she was tired after just returning home from a big race in Montreal the week before.  She was home and awake watching the morning news with our woofie Colby.   The local news cut over to the Today show early because of what was happening, so my mom watched it all unfold on live TV.  She remembers not believing what she was seeing.  How could she?  She watched as the 2nd plane hit the building.  She watched the towers fall...
The next month when mom and dad were on the east coast, they went to New York City, it was late October and people were being encouraged to go visit New York City...so they went.  Mom and dad took the subway to ground zero.  Mom tells us that the first thing she remembers is the smell.  It was still horrific a month later.  She remembers the chain link fence filled with photos and remembrances.
Unforgettable.
And so we remember, 10 years later.  And forever.

Although I wasn't around yet, my Dad and Mom were, and they told us about it. We shall never, ever forget.

I was not yet born, but it is so striking to read others' stories of that day. So many humans, even far away geographically, were affected in such a deep way. Mom continued to be terrified for months - afraid for her kids to fly in planes, afraid of what else was going to happen, especially with the anthrax scare as well. We will never forget.

We remember, and hope for a better future. Mommy had never considered the smell--what a searing memory that must be.

Hi Madison, thanks for sharing your story. We will always remember.

It is something no one will ever forget.

Thank you for sharing your story. My mom has been sharing with me about that day that she'll always remember.

My mom was in school when this all happened, she says its hard to remember..

Wow! Seems like the smell would make it very emotional. Mom and Dad chickened out of their NYC Christmas vacation that year. Good fur you fur being strong and visiting! xoxo

It has left a mark on all of us I'm afraid. Life will never be like it was before those days.l Now we're forever watchful and just waiting.

I could never forget. No, not ever.

Our dad heard on the radio that a plane had crashed into the WTC, so mum turned on the TV to see if there was any news about what happened and also saw the second plane crash live on the TV. She says she will never forget those images.
We are thinking of all those who lost their lives and their families. We will not forget.

Thanks for sharing your mom and dad's story with us, Madison. Our mom says it was a very sad time. We will always remember....

I was around then. My SS was at university and saw it on TV. Everyone thronged around the usually ignored TV screen in the corridor, dumbfound and incredulous. The first thought was that it was a bad practical joke; only that it wasn't.

Wes remembers at our house too. Wes will never forget!
Kisses
Nellie

we join you in remembering and caring. Love Darcy and Bingley xx

We weren't alive then, but Meowm has told us all about it. So now we can remember with her.

It is good to see you Madison. Meowm adores you!