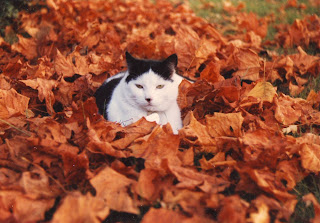 Roger Ramjet.
He wasn't our mom's first cat, but in many ways he was the cat who started it all.
Mom had adopted her first cat and soul mate Morgan from the Humane Society.  Nimue soon followed, being adopted from an ad in the newspaper.  All was happy and well for many years, until the summer of 1985.
The front door was open and the screen door closed.  There he was.  Paws on the door, looking in.  Mom had never adopted a stray before.  Mom and dad didn't know if he belonged to someone else in the neighborhood.  He wasn't um...uh...fixed.  They asked around and found that he'd been hanging out for quite sometime but no one claimed him.  Mom and dad got him fixed...and pretty soon he moved in for good.  He got a collar and tag.  He was SO PROUD of his collar and tag.  It meant so much to him.
He was something.  Larger than life.  Turns out every cat, dog, possum, raccoon in the neighborhood knew him.  And liked him.  Mom and dad finally figured that he was President of the Local Homeless Cat Union.  He regularly held meetings and invited non-cats to attend.  Just to keep the neighborhood peace.
He loved milk and would show up when families in the neighborhood had their morning cereal.  When he caught mice he'd always give parts to mom and dad...sometimes exactly half a mouse.  Sometimes only the heart.
He loved to ride shoulders, but only on the left side.
After 5 amazing years in our family, he developed severe kidney disease.  He passed away in June of 1990.
Ever since then, there has been a parade of strays who have been adopted by my family.  For each one the question is the same.
Did Roger send you?
Posted by Cory at 12:01 AM

Labels: Life will never be the same without you, Roger Ramjet

I bet Roger continues to hang out and let the cats know about what softies your people are and the fantastic nip that they plant in the yard...

Roger sounds like he was quite a formidable presence! I love that sometimes he left your humans mouse hearts, kind of like Valentines.

What a lovely post!! Of course Roger sent them!

Me and mom are glad to know about Roger.
Me and mom are so happy Roger still keep sent all to your pawrents because they have a great heart : )

Roger sounds like he was a wonderful boy. We are sure he sent you all ~ he clearly had a big heart. Bless him.

Oh, Roger was a great kitty. I bet he does send kitties your way now...

He sounds so special. It made mum a little teary to read how proud he was of his collar and tag.

We loved hearing about Roger! He sounds like the ambassador who opened the door for all the stray cats your Mom and Dad have helped! What a sweetie!

Neat story and unique kitty for being a stray.

Y'know...Memorial Day is a good day to remember not only those that gave their lives for our freedom, but to remember those who came before. Roger was quite the character, wasn't he??

Happy Memorial Day to you all!

Well done, Roger Ramjet! What a fine Cat you were.
Cory, we suspect Roger may be directing some overflow our way! Now we know who sent us.

You have Rumblemum in tears, what a lovely, sweet story of Roger. I have the feeling that Roger is now at the bridge, welcoming in every new kitty and puppy.

What a lovely story - thanks for sharing! What a character!

I always leave SS the whole mousie, intact with the fatal bite at the neck!

What a heartfelt post...the ones who came before do have a big influence on our lives, don' they!

Roger sounds like he was a real take-charge man cat, like our Kelly was. It's good to remember our absent friends...