Today, November 1st is the Day of the Dead. It's a day to remember those who came before. I was thinking that we might post a bit about all of our guardian angels, but because it's American Diabetes month, today I'm going to honor Maxfield. 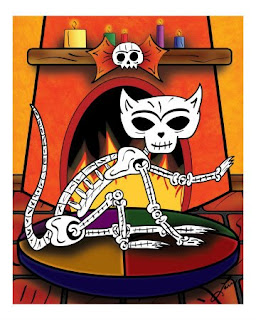 Maxfield passed away in February of 2004, before I was even born. All I know is what my mom tells me of him. He was an amazingly handsome buff furred boy. He moved in on my mom and dad within months after Roger Ramjet ::bows head in honor:: passed away in 1990. Max "traded up" from a neighbor person who did not care for him...and when they found out where he was living several months after the fact...didn't even want him back. Max was a smart boy. Since mom and dad told me that Roger Ramjet was President of the local cat union...it was well known in the neighborhood there was an opening at our house. Maxfield stepped up to the job. He was originally named after the food that fed him (Nutromax)... but later mom and dad expanded on that because he was so handsome. Maxfield Parrish seemed to suit him. 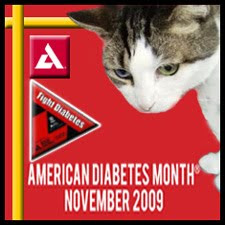 Max was best buddies with my mentor, guardian angel Jonathan. That's why I was chosen to write this post today. Max was 14 years old when mom and dad noticed he was drinking lots of water and he ate a lot but was losing weight. He was diagnosed with feline diabetes. It was a rough few months. Mom and dad had to give Max insulin injections 2 times a day. Even then, controlling a Max's blood sugar levels was almost impossible. Mom searched every website and read everything she could. The scary part was that too little insulin would be harmful, but too much could kill him. It was a daily struggle and panic attack according to my mom. They had to be brave. Some cats do ok for a long time, but mom and dad could not get Max's blood sugar under control. One day, Max got an injection and it was too much. He was rushed to the vet, but they could not save him. He passed away 4 months after he was diagnosed. 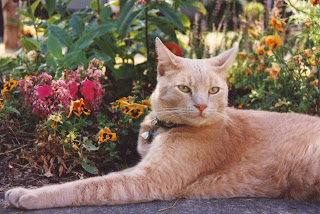 Max will always be remembered as amazingly handsome and a loyal friend. He helped heal mom and dad's heart when Roger Ramjet had to leave, and he left a large hole in our family when he left. Jonathan had a hard time adjusting to Max's passing, but he grew closer to my mom during that time. When my momma Ellie and I moved in, we helped mend Jonathan's broken heart. Maxfield loved his yard as much as Jonesie does, and in a way Jonesie carries on the work that Maxfield started in the garden. Before Jonesie arrived in 2002, it was always "black and tan"...meaning Jonathan and Maxfield, helping my dad in the garden. It was Maxfield who helped mom plant her original herb garden. 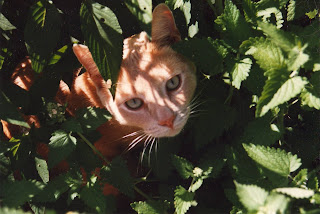 Maxfield, we miss you and love you always!

Max was a very handsome cat and we are sorry that you all were unable to get his blood sugar under control--it can be hard with cats. That was a lovely tribute.

That was such a loving tribute to Max. We are all a bit leaky-eyed here...

Hi Cory,
Thanks for sharing Max's story. Glogirly knows all too well how hard it can be to keep blood sugar in check. It looks like Max had a lot of love in his life. We know how much you must miss him.

Oh Cory, thank you for telling us about Maxfield. The pictures show his handsomeness. Mom's heart was aching with the thought of your humans trying to stabilise his blood sugar level and worrying that it's too much or too less. Many purrs to them and to Maxfield at the bridge.
Siena & Chilli

I'm struggling with that with my Nimbus, it IS a struggle. Even a year into it nearly, it's still a struggle. Cat's are difficult to regulate, and any little thing can set them off. Please, if it happens again, don't give up. There are better insulins out now than even a couple years ago. It's one of those new insulins, a human derivitive actually, that has been Nimbus' saving grace. I just wish someone had warned me how much of a heartbreaker it can be before I got so entangled in it. But I wouldn't change it a bit.

Oh you made us leaky.
What a great kitty Max was and he was very lucky to have you as a family.
Diabetes Sux. Bigtime.

Remembering the great ones who came before with respect and love is the very best way to honour their memory.

We can see Maxfield was a special cat! Thank you for sharing his story with us. We know your mom tried to do what's best for him. Sometimes it's just not enough. Max was lucky to have found your family and they were lucky that he chose them...

What a spcial kitty Maxwell was. Thank you very much for sharing him with us by your post.

Maxfield sounds like a real sweet kitty -- and tough, too! We're sorry that his diabetes was too hard to control. I'm sure that he had the best life possible while he was with you.

By the way, Jonesie is on the LOLSpot again today.

Max sounds such a wonderful kitty. This was a lovely tribute to him and it was nice to know about him.
And I must say how sorry I am that I missed the first meeting of the garden club. Let me just say that I am not talking to the mom right now. She made me miss it. I cannot believe it.
The only thing that is making me not be too mean is that she is letting me visit around today for awhile. Sometimes we just have to put up with a bunch of stuff we don't like but oh well.
Hope you had a fun Halloweeen yesterday.

What a special way to honor such a handsome and wonderful Man Cat. You can tell how much he was loved just from reading your words and he will be remembered by all who read his story forever.

What a beautiful story to share. He absolutely traded up when he came to your family. It's hard when a kitty is sick and we know your parents did their best to care for him, it must have been so scary for them. I know Maxfield and Jonathan are playing together at the bridge.

What a beautiful remembrance post ~ it made us feel sad and yet happy. It is sad he's gone but he was so obviously reelly loved. Wot a pity he got that nasty diabetes ~ we're gonna post the diabetes logo in our sidebar tomorrow as soon as mom has time.

Thats a realy lovely tribute you did there.. What a beautiful kitty.. Hugs GJ x

Such sweet memories of a sweet kitty. He sounds like he was a very special and very loved kitty.

We enjoyed learning about Maxfield. Somewhere in the long-ago past, Max must be related to our Kelly cat because they were so much alike.

Thanks so much for telling handsome Maxfield's story. He looks like my Lucky. It's a little ironic that you post about your Max 4 months to the day after I lost my Max.